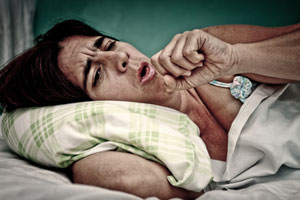 Health risk: Adult women with Rett syndrome tend to have good general health, but are vulnerable to pneumonia.

As adult women who have Rett syndrome age, their general health and cognitive skills improve, but they continue to lose motor skills, according to a study published 20 November in Clinical Genetics1. This is the first long-term study to chronicle the effects of Rett syndrome in adulthood.

Rett syndrome, a developmental disorder that primarily affects girls, is characterized by low social interest, limited ability to communicate and severe motor deficits, such as floppy arms and legs and repetitive hand motions. Symptoms of the disorder first appear around 6 to 18 months of age.

Because it appears in childhood, most studies of the syndrome have focused on symptoms in children.

In the new study, researchers looked at 53 women with Rett syndrome who were 16 years of age or older in 2007. Five years later, 7 of these women had passed away; parents of 30 of the women responded to the researchers’ request for information.

The parents filled out questionnaires addressing where the women live, their daily living skills, their medical history and whether they seemed to have improved or worsened in various areas over time.

General health, particularly for the oldest participants, improved over five years, the study found. However, three of the women had been hospitalized with pneumonia and one woman had died of the infection, suggesting that pneumonia is a significant health concern for women with the syndrome.

Alertness, particularly for those women older than 30 years, also improved over the five years. And women who were 16 to 20 years old at the beginning of the study tended to develop better memory.

Despite these improvements, the majority of the participants still lived in residential care facilities in 2012 and only two lived in apartments with 24-hour care.

Overall, the women’s motor function deteriorated slightly. However, motor skills improved for three women who were among the oldest participants. This suggests that physical therapy for motor function may continue to have an effect into adulthood.

Overall, the results suggest that women with Rett syndrome fare well with age. However, longer follow-ups will be even more informative, the researchers say.