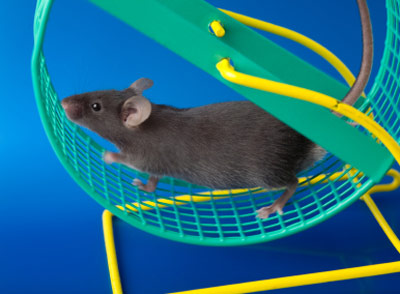 Busy mice: Rett syndrome mice treated with a molecule that enhances the activity of a neuronal growth factor run more on their wheels than controls do.

Busy mice: Rett syndrome mice treated with a molecule that enhances the activity of a neuronal growth factor run more on their wheels than controls do.

Two compounds that enhance the activity of brain-derived neurotrophic factor (BDNF), a protein needed for the growth of neurons, improve motor skills in mouse models of Rett syndrome and increase the mice’s lifespan1,2.

Rett syndrome is an autism-related disorder characterized by intellectual disability, repetitive hand movements and deficits in motor skills. It is caused by the loss of one copy of the MeCP2 gene.

MeCP2 regulates the expression of thousands of other genes, including BDNF3. Apart from its role in neuron growth, BDNF also directs the formation of synapses, the junctions between neurons, and is important for learning and memory. MeCP2-deficient mice have lower-than-typical levels of BDNF in the brain4.

A new study published in the February issue of Neurobiology of Disease shows that male mice lacking MeCP2 have low levels of two proteins — huntingtin protein and huntingtin-associated protein 1 — that help transport BDNF to synapses. BDNF transport is impaired in neurons that don’t express MeCP2, but recovers when MeCP2 expression is restored, the study found1.

In another study, published 22 December in the Journal of Applied Physiology, researchers treated MeCP2 mutant mice with 7,8-dihydroxyflavone, or 7,8-DHF, a molecule that activates a signaling receptor to which BDNF binds2.

These mice also live longer and run more on a wheel placed in their cage than their untreated siblings do. In addition, 7,8-DHF alleviates breathing difficulties, another feature of Rett syndrome in both mouse models and people with the disorder.

Although MeCP2 affects a number of important cellular pathways, the two studies suggest that compounds targeting BDNF are promising as treatments for Rett syndrome.