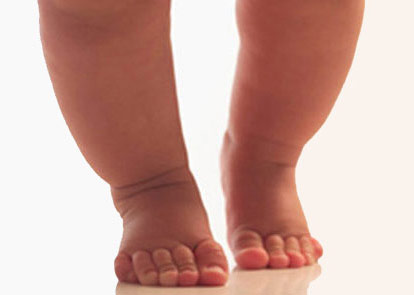 Toeing the line: Many children with autism cannot easily flex their ankles past 90 degrees, causing them to walk on tiptoes.

Children who walk on their toes are more likely to have autism than other forms of developmental delay, according to a study published in January in The Journal of Child Neurology.

Many studies of children with autism report problems with gait, or alignment while walking. Of these, one of the most commonly described is persistent toe walking — for longer than three months after learning to walk — and tight heel cords, which restrict ankles to a 90 degree angle.

Of 954 children referred to a developmental pediatrics clinic, 115 had at one time shown persistent toe walking and 75 still had tight heel cords.

The ratios are higher in the subset of children diagnosed with an autism spectrum disorder: of 324 children with autism, 65 had shown toe walking and 39 had tight heel cords.

The results suggest that children who persistently walk on their toes should be tested for autism. Likewise, children with autism should have their gait examined and be referred to physical therapy when appropriate.