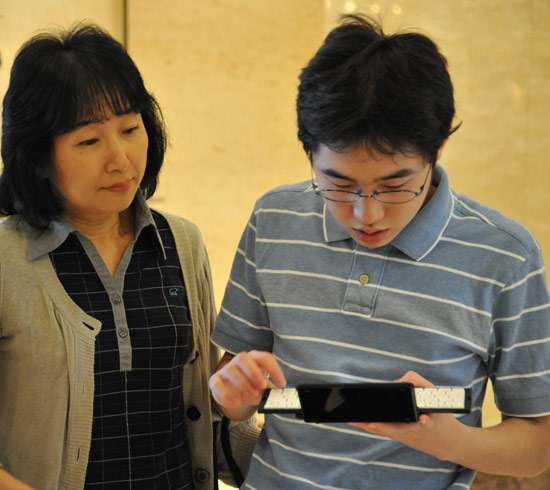 Douglas Biklen Voice box: People with autism who struggle with language and coordination can communicate using devices that sound out the words that they type.

Speech-generating devices are a beneficial intervention for people with autism who cannot speak or sign, according to two studies published in the past few months.

Because autism includes deficits in language — often accompanied by motor-skill impairments that make straightforward typing or signing difficult — many people with the disorder use devices and facilitators to communicate. These range from simple boards on which they can point to images, to technologically advanced speech-generating devices that sound out the words that users type — often with the physical help of a facilitator.

In the 1990s, many of these devices came under scrutiny because some studies suggested that the facilitators were influencing the users.

The two new studies address some of these concerns. The first, a meta-analysis published 5 March in the Journal of Autism and Developmental Disorders, shows that these devices enhance communication for people with autism, and may also help improve other behaviors related to the disorder1.

Most published reports are on a few individuals, making an evidence-based assessment of the technique difficult. The researchers reviewed 122 studies and narrowed them down to 24 based on strict criteria — such as the inclusion of a control and publication in a peer-reviewed journal.

Their analysis shows that, overall, speech-generating devices greatly improve communication for people with autism. Individual studies show that they can also have a positive effect on social behavior, improve the users’ academic skills such as spelling, and lessen challenging behaviors such as tantrums. The analysis suggests that researchers should explore the role of these devices beyond improving communication.

One noted limitation of this study, however, is that only successful case studies are likely to be published in peer-reviewed journals.

The second paper, published 28 April in Autism, addresses head-on the critique that the facilitator might inadvertently direct the hand of the user2.

In this study, researchers outfitted a 40-year-old man — who had no speech and no apparent literacy skills outside of facilitated communication — with an eye-tracking monocle while he used a speech-generating device.

They found that the man was twice as likely to look ahead to the next letter he intended to type than any other letter on the keyboard. For example, while typing the word ‘dangerous,’ he looked at five of six of the letters in ‘danger’ before he typed the ‘d.’

The researchers also note that this individual is not usually very compliant and was adverse to many of the test conditions — such as being touched, sitting still in a hot room and wearing a large apparatus on his head. He would not have sat still doing one task for hours, they suggest, unless he felt there was a benefit — the chance to communicate.

Correction: This article has been modified from the original. It has been changed to clarify the distinction between assisted and facilitated communication.