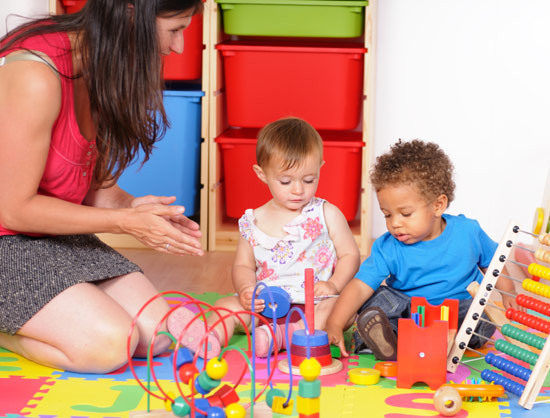 Social learning: Teaching toddlers with autism skills in a real-world context enhances the benefits of the lesson.

A new intervention that teaches toddlers with autism skills in a real-world environment — a playgroup rather than a one-on-one interaction with a researcher, for instance — more than doubles their ability to imitate others, according to a January study in The Journal of Child Psychology and Psychiatry.

Only a few studies have shown that early intervention in children with autism as young as 2 years of age can be successful. In the new study, researchers gave two groups of 25 toddlers with autism — between 21 and 33 months of age — a standard intervention in a classroom, as well as additional training for parents. This program, called the Assessment, Evaluation and Programming System for Infants and Children, includes lessons designed to improve children’s motor skills and their ability to play and socialize with other people.

One of the two groups also received training that helps children interact in groups and learn social skills in a natural environment.

For example, in traditional imitation therapy, a teacher might clap her hands and encourage a child to do the same. In the new intervention, by contrast, researchers give a group of children a toy that can be played with in multiple ways, such as a slinky, and then focus on one child, encouraging the other children to play with the toy in the same way.

“The key ingredient is to do things that are meaningful. We try not to teach a skill out of context and in a fake way,” says Rebecca Landa, director of the Center for Autism and Related Disorders at the Kennedy Krieger Institute in Baltimore, Maryland, who developed the approach.

Both groups of children improved in their ability to pay attention to or imitate others, and to be aware of their own or others’ identities. The researchers only considered imitation to be a sign of social behavior if the children engaged the other person — for example, by looking at them — before repeating the action.

But the toddlers who received the extra training showed much greater improvement in social imitation — for example, imitating the tester by banging Legos together.

The children maintained the improvements up to six months after the training, suggesting that these interventions can have long-term benefits for children with autism.

“The brain needs to be nourished with good experiences that it knows how to digest,” says Landa. “When children relate to other people in ways that are meaningful to them, then people are going to engage with them more, hence giving them more learning opportunities.”