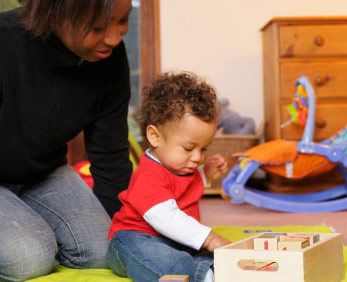 Early signs: Parents of children with autism tended to be more concerned than those of controls that their 6-month-olds were not saying ‘Mama’ and ‘Papa.’

Warning signs of autism, such as deficits in social ability and fine motor skills, are apparent as early as 6 months of age, according to a large longitudinal study published in the March issue of the Journal of the American Academy of Child and Adolescent Psychiatry1.

Autism is typically diagnosed starting around 3 years of age, but often even later. As a result, researchers know little about indications of the disorder that might be apparent from birth through 30 months of age.

Studies aiming to identify early biomarkers of autism often focus on the infant siblings of children who have the disorder. According to various reports, these siblings have between a 5 and 20 percent chance of developing autism.

But there are limitations to this approach. First, only a small proportion of children in each study will go on to have an autism diagnosis, which could skew the results. Second, having an older sibling with autism could influence the infant’s home environment or parents’ awareness of their child’s abilities.

The new study addresses these limitations by looking retrospectively at the health records of 13,971 children born between 1991 and 1993 who are being followed in the Avon Longitudinal Study of Parents and Children. This group includes 86 children who were diagnosed with autism by the age of 11.

The researchers looked at multiple parental report questionnaires, which were filled out at various time points up to 30 months of age, for more than 240 traits that could indicate autism. The traits are related to the core features of the disorder — social and communication deficits and repetitive and restricted behaviors — as well as conditions that commonly occur with it, such as deficits in motor skills and gastrointestinal symptoms.

Children who went on to have an autism diagnosis are more likely to have had deficits in social and in fine motor skills as young as 6 months of age compared with controls, the study found. Overall, the best predictor of autism at 6 months of age is whether parents were concerned about their children’s vision and about whether their children were saying ‘Mama’ or ‘Papa.’

Parents of children with autism are also more likely than those of controls to have been concerned about their children’s hearing and their vocabulary starting at 15 months of age. Parents reported deficits in communication and play behavior and signs of repetitive behavior in their children starting at 18 months, and were more likely than those of controls to report increased crying and gastrointestinal disturbances by 30 months.

Fewer traits were associated with autism when the study controlled for differences in intellectual disability, suggesting that cognitive impairment could account for some of these symptoms.