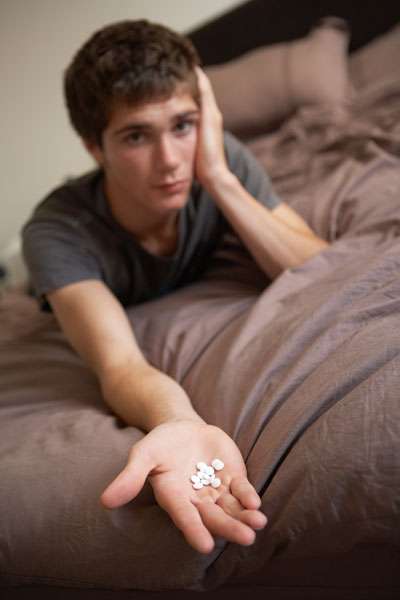 Side effect: Risperidone may alleviate repetitive behaviors in children with autism, but it leads to multiple side effects.

Long-term treatment with risperidone — an antipsychotic approved to treat autism — may boost levels of prolactin, a hormone that stimulates milk production, according to a study published in December in the Journal of Child and Adolescent Psychiatry1. Risperidone use may also affect sexual function and lead to enlarged breasts in males, the study found.

Risperidone is one of only two drugs approved by the U.S. Food and Drug Administration to treat symptoms of autism, specifically, hyperactivity and repetitive behavior. But it also has severe side effects, including weight gain, diabetes and heart abnormalities.

Another potential side effect, elevated prolactin, is of particular concern when treating children. Excess prolactin can dampen the production of estrogen and testosterone, which can have long-term consequences if it occurs during or around the time of puberty.

In the new study, researchers looked at the effect of long-term risperidone treatment on 10- to 20-year-old males who have autism or disrupted behavior disorder (a disorder characterized by tantrums and aggression). They compared 98 individuals who have one of these disorders, 51 of whom took risperidone for periods that ranged from 16 months to more than 10 years, and 47 of whom had never taken the drug.

Boys on risperidone are 72 times more likely to have elevated prolactin than those who don’t take the drug, the study found: 24 of 51 boys on risperidone and 1 of 47 controls have excess prolactin. Of those 24 boys who took risperidone, 5 have sexual side effects, including diminished sexual interest and erectile dysfunction, and 8 have enlarged breasts,
or gynecomastia.

There are caveats when using questionnaires to measure sexual function, as the participants may be too shy to be honest, the researchers say. Also, the survey asks for comparisons with the time prior to drug treatment. Children may not recall that time period accurately, or may have gone through puberty in the interim.

Clinicians should monitor young men on risperidone for diminished sexual function, which is the side effect most closely linked to risperidone treatment and elevated prolactin, the researchers say.