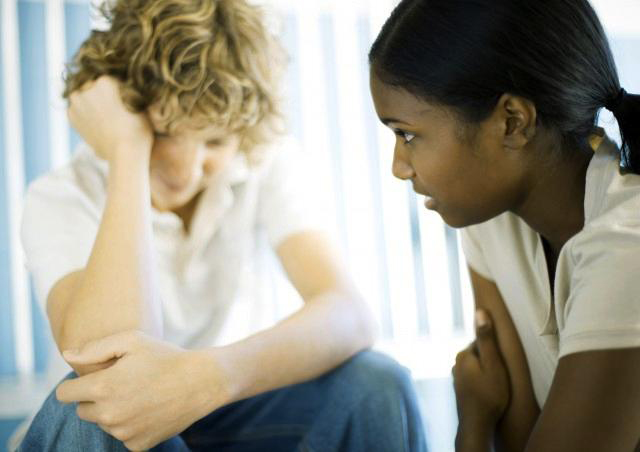 Eye to eye: Teenagers with fragile X syndrome tend to have social anxiety and avoid eye contact, which might improve with oxytocin treatment.

The results suggest that oxytocin could help treat the social anxiety that is common in individuals with the disorder.

Oxytocin is a neurotransmitter and hormone that is much hyped for its role in enhancing feelings of trust and empathy in both people and rodents.

In the new study, eight teenage boys with fragile X syndrome took either 24 or 48 intranasal units of oxytocin or placebo on three separate occasions before interacting with a female researcher. The researchers randomized the order in which they gave each boy the three doses. The study was also double-blind, meaning that neither the researchers nor the participants knew when the teenagers received the drug or placebo.

The teenagers shifted their gaze in order to look at the researcher slightly more often — approximately 20 times instead of 15 — after taking the lower dose of oxytocin compared with placebo, the study found. Their overall level of eye contact was still significantly lower than is typical, however.

The higher dose of oxytocin had no statistically significant effect on eye contact compared with placebo, however.

Studies have shown that high doses of oxytocin lead to epigenetic changes that reduce the amount of the brain’s oxytocin receptor.

There was also no significant difference in the level of eye contact made between the two situations, which the researchers describe as social proximity and social interaction.

The participants also had lower levels of the stress hormone cortisol in their saliva after taking the higher, but not the lower, dose of oxytocin. The researchers say they cannot explain the contradictory data for the two doses of oxytocin, but recommend further trials with large numbers of participants.