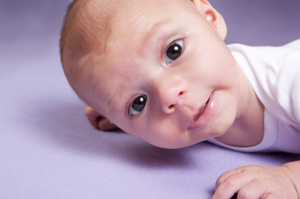 Head lag: Infants who later develop autism are more likely than controls to struggle with holding up their head.

Babies at high risk for developing autism are more likely than controls to have delays in acquiring motor skills, according to two long-term studies published in the past few months.

Both studies follow siblings of children already diagnosed with autism. These ‘baby sibs’ are up to 20 times more likely than the general population to develop the disorder.

The first study, published in the December issue of Infant Behavior and Development, looks at the relationship between motor skills at 3 and 6 months of age and communication ability at 18 months1. Studies have shown that motor skills acquired in infancy can help with language development. For example, pointing or following the gaze of a caretaker can help a baby learn words.

Baby sibs who have communication problems at 18 months tend to be those who had motor deficits as infants, the study also found. This link is weaker for motor delay at 6 months of age than at 3 months.

In the second study, published in the September/October issue of the American Journal of Occupational Therapy, researchers see a link between a delay in the ability to sit up at 6 months of age and a diagnosis of autism at 3 years of age2.

The researchers looked specifically at an infant’s inability to keep its head aligned with the spine when sitting up. Children typically stop showing this head lag starting at about 4 months of age.

At 6 months of age, 9 of 10 baby sibs later diagnosed with autism showed head lag, compared with 7 of 30 baby sibs who did not develop the disorder.

Clinicians should screen infants at risk for developing autism using the ‘pull-to-sit’ task, which identifies this delay, the researchers say.