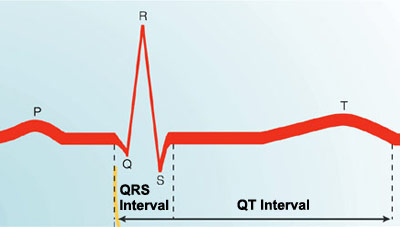 Broken beat: Mice that carry a mutation in the Rett syndrome gene MeCP2 in all cells have longer-than-average QT intervals, indicating that their heart cells struggle to regenerate their electrical potential after each heartbeat.

Mice engineered to carry a Rett syndrome mutation only in neurons are prone to an irregular heartbeat that can lead to sudden death, according to a study published 14 December in Science Translational Medicine1.

These mice show that propranolol, a potential treatment for Rett syndrome, might not be effective against the heart defects, or arrhythmias, that affect some individuals with the disorder, the researchers say.

Rett syndrome is characterized by autism, intellectual disability and loss of motor skills, as well as heart and breathing abnormalities. About 26 percent of deaths attributed to the syndrome are sudden and unexplained.

Of 379 women in the Rett Syndrome Natural History Study, 70have an abnormal heartbeat, the new study found.

Specifically, the women have a longer-than-typical QT interval, which indicates that heart cells cannot efficiently regenerate their electrical potential after each heartbeat. Long QT intervals are known to lead to arrhythmia, and could underlie the sudden death associated with the disorder, the researchers say.

The researchers sought to model this effect in mice. In mice that model Rett syndrome, those expressing a mutation in the Rett syndrome gene, MeCP2, in all cells have longer QT intervals than controls do, the study found. When researchers electrically stimulate their hearts, the mutant mice are more likely than controls to develop a rapid and irregular heartbeat, which also lasts for a longer period of time.

The researchers also engineered mice to carry the MeCP2 mutation only in neurons. These mice have cardiac symptoms that are intermediate between those of the controls and those lacking MeCP2 in all cells. The researchers say this is unexpected because abnormalities in heart cells rather than in neurons were thought to underlie the cardiac symptoms.

Neurons can control heart rate through various mechanisms, however, and persistent seizures, a symptom of Rett syndrome, can also affect heart cells, the researchers say.

Because the Rett syndrome mutation is on the X chromosome, it affects boys more severely than it does girls: Boys with Rett syndrome generally die within the first year of life, whereas girls develop symptoms around 2 years of age.

Likewise, male mice lacking MeCP2 in all cells develop symptoms at 2 to 3 months of age, whereas female mice show them at 9 or 10 months. One of 11 mutant male mice and 2 of the 7 female mice, but none of 24 controls, died when their heart was electrically stimulated.

Beta blockers, which are used to treat heart arrhythmias, are thought to hold potential for treating Rett syndrome. However, propranolol, one type of beta blocker, does not normalize the QT interval or protect against irregular heartbeats in these mice, the study found.