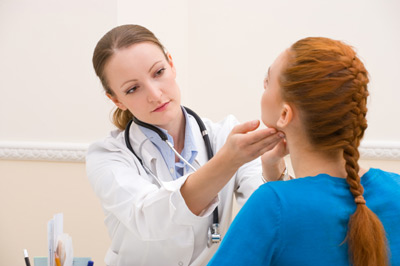 Gland effects: The thyroid hormone plays a role in brain development, and abnormal maternal levels of the hormone may affect the fetal brain.

Children born to women who have low levels of the thyroid hormone have a moderately increased risk of developing autism, according to a large Danish study published 10 March in BJOG: An International Journal of Obstetrics and Gynaecology1.

The study also found that having excess thyroid hormone during pregnancy increases the odds of having a child with attention deficit hyperactivity disorder (ADHD).

The thyroid hormone plays an important role in brain development, and fetuses rely on the mother’s supply of the hormone for the first trimester and much of the second2. As a result, abnormal maternal levels may have lasting effects on her child’s brain.

A study last year found that children born to mothers with severely low thyroid levels have four times the odds of having autism symptoms as those born to women with normal levels of the hormone3. That study looked at 4,000 children overall.

The new study analyzed data from 857,014 children born in Denmark between 1991 and 2004. More than 30,000 of these children were born to women with abnormal thyroid levels. The study found moderate links to autism and ADHD, with low hormone levels increasing the odds of an autism diagnosis by 34 percent and high hormone levels increasing ADHD diagnoses by 23 percent.

This association is only significant if the mothers were diagnosed and treated after giving birth, indicating that they had abnormal thyroid levels while pregnant. This, and the fact that the father’s thyroid levels have no effect on autism or ADHD risk, suggests that it is exposure during gestation and not a genetic predisposition that confers the risk.

Doctors should screen women for abnormal thyroid levels before and during early pregnancy, the researchers suggest.