Clinical research: Lack of gestures is specific to autism 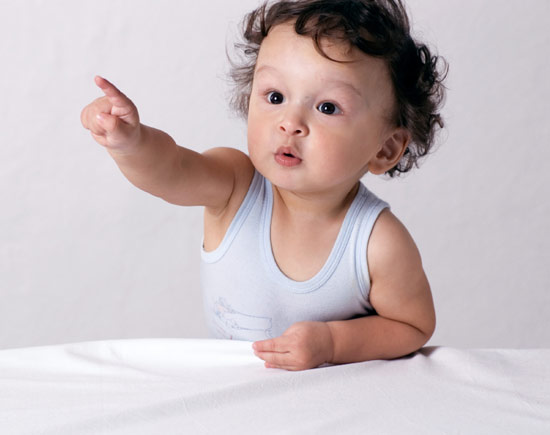 Specific screening: Pointing is one of the few behavioral measures that can distinguish autism from other developmental disorders.

Toddlers with autism are less likely to use gestures to communicate than are typically developing children and those with developmental delay or specific language impairment, according to a study published 6 July in Autism1. By contrast, other behavioral screening measures cannot distinguish autism from other developmental delays at age 1 or 2.

Early intervention is the best known treatment for autism, making it crucial to find measures that allow for diagnosis earlier than 3 years of age.

Several measures, such as eye movements or results from brain imaging scans, can distinguish toddlers with autism from typically developing controls. However, critics argue that these studies do not test whether the measures are specific to autism.

In the new study, researchers identified 4-year-old children diagnosed with autism, developmental delay or specific language impairment, who were participating in the Early Language in Victoria Study in Melbourne, Australia. The parents of these children answered questionnaires about their child’s developmental progress at 8, 12 and 24 months of age.

The use of gestures at 1 and 2 years of age is the only measure that reliably separates the 18 children with autism from 16 children with developmental delay, 20 children with specific language impairment and 60 typically developing children, the study found.

By contrast, other reported warning signs of autism — including ‘responding to name,’ ‘requesting attention,’ and ‘sharing interest’  — distinguished 1- and 2-year-old children with autism from typically developing children, but not from children who have other developmental delays.

Parents of children with autism are also more likely to report some concern over their child’s developmental progress at 2 years of age than are those of children in the other groups: 71 percent for autism compared with 40 percent for developmental delay, 25 percent for specific language impairment and 28 percent for typically developing children. There is no difference in the level of parental concern among the groups at 8 and 12 months of age.