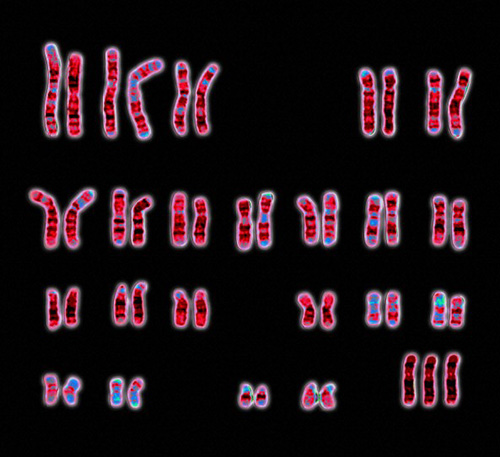 Wessex Reg. Genetics Centre, Wellcome Images Extra X: Men born with two X chromosomes rather than just one are six times more likely than the general population to have autism; in women with an extra X (shown above), the link is less clear.

Girls and boys born with an extra X chromosome both tend to have difficulties understanding the minds of others, but for different reasons than children with autism do, according to a study published 22 March in Genes, Brain and Behavior1.

Researchers have previously noticed parallels between autism and extra-X disorders.Men with two X chromosomes and a Y chromosome have Klinefelter syndrome and are six times more likely than controls to be diagnosed with autism.There is less information on autism rates in trisomy X, the condition in which girls have three X chromosomes rather than two. One study of 58 women with trisomy X found no autism cases, in keeping with the relative rarity of autism in women2.

The researchers recruited 29 children with Klinefelter syndrome, 17 with trisomy X, 56 with autism and 88 controls, all between the ages of 9 and 18 years. They excluded children with intellectual disability. They tested theory of mind in the children by asking them to identify the perspectives of characters in cartoon images with accompanying text. The children with extra-X disorders or autism all had a relatively difficult time doing so.

Multiple cognitive skills are necessary to conceive of others’ minds, so the researchers wondered whether the children were all having difficulties for the same underlying reasons. They found that in children with an extra X chromosome, performance on the theory of mind tasks tracks with their ability to sustain attention, indicating that their lack of focus sabotages their ability to understand others’ thoughts. Children with autism who struggle with theory of mind tend to have trouble comprehending and using language and recognizing faces.

Finally, the researchers assessed whether difficulties with theory of mind are more common in people with extra X disorders if they show strong signs of autism at an early age. They found that this is not the case. People with the extra-X disorders often show social difficulties, but they may not always meet the full criteria for autism.