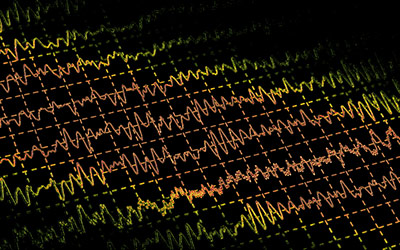 Brain waves: In families that have two children with autism, usually both children either have epilepsy or don’t.

In families with a history of autism, the affected children are seven times more likely to also have epilepsy than their unaffected siblings, according to a study published 1 December in Molecular Autism1. The results suggest that epilepsy and autism share some risk factors.

Epilepsy and autism frequently co-occur, with anywhere from 5 to 40 percent of people with autism having epilepsy, depending on the study population. This may be because the same genetic factors underlie the two disorders — for example, mutations in genes that dampen brain activity. In the new study, researchers examined the prevalence of epilepsy in multiplex autism families — those that have more than one child with the disorder.

The researchers looked at 664 children, including 478 with autism, from 290 families who are part of the Autism Genetic Resource Exchange database.

In another study published last August, the same team of researchers found a rate of epilepsy of 2.4 percent in 2,644 children with autism who are part of the Simons Simplex Collection. This collection of families, a project funded by the Simons Foundation, SFARI.org’s parent organization, has one child affected with autism and unaffected parents and siblings2. The rate of epilepsy in the general population is roughly 1 percent.

Taken together, these results suggest that risk factors for autism and epilepsy are inherited together.

The prevalence of epilepsy has shown to be elevated in people who have both intellectual disability and autism and in females with autism3. The new study confirms the former observation.