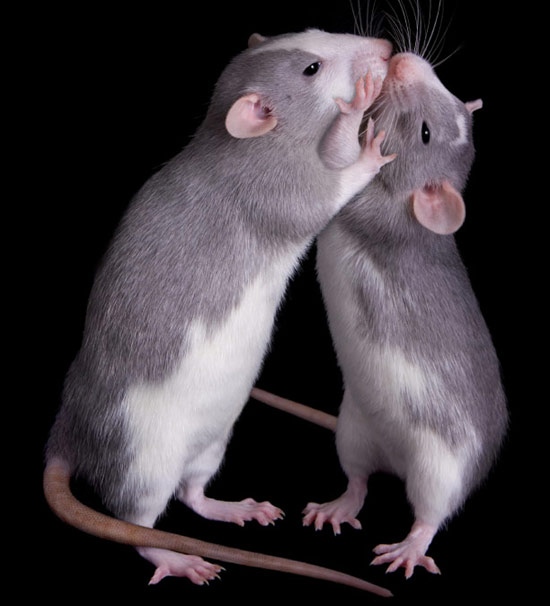 Rough and tumble: Rats, which have more sophisticated social behaviors than mice do, could better model some aspects of autism.

Giving GLYX-13, a drug that targets an autism-associated brain pathway, to rats bred to be less social increases how much they communicate while playing. Based on these results, a review published 28 June in Neuroscience and Biobehavioral Reviews recommends the drug as a treatment for autism1.

The autism-associated receptor complex NMDA-R binds to glutamate, a chemical messenger that activates signals in the brain. NMDA-R and glutamate are both thought to regulate a process involved in learning and memory. Several molecules associated with this pathway, including GRIN2A and GRIN2B, both subunits of NMDA-R, have been linked to autism.

Studies have also shown that D-cycloserine, a molecule that binds to and activates signaling through NDMA-R, enhances pair-bonding between prairie voles and lessens social withdrawal in children with autism2.

In the review, researchers report that GLYX-13 — which similarly activates NMDA-R and is in phase II clinical trials as an antidepressant — rescues antisocial behavior in rats.

The researchers used antisocial rats that are bred to emit fewer-than-usual ultrasonic vocalizations, which are rodent cries that are inaudible to the naked human ear. These rats interact less with their peers and vocalize less during play than control rats do, the study reports. They also express lower levels of many proteins associated with autism, including several in the NMDA-R pathway.

GLYX-13 rescues the antisocial behavior when injected into these rats, the study reports3. GLYX-13 can also enhance signals between neurons in culture and enhance learning in rats4,5.

Autism research generally relies on mouse models, which have well-understood genetics and are easy to handle. Rats have more sophisticated social behaviors than mice do, including complex rough-and-tumble play, and could better model some aspects of the disorder.