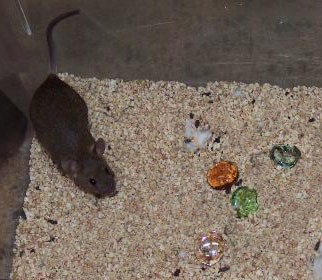 Stashing away: An autism mouse model treated with an emerging fragile X drug does not bury as many marbles — one measure of repetitive behavior — as untreated animals do.

Stashing away: Anautism mouse model treated with an emerging fragile X drug does not bury as many marbles — one measure of repetitive behavior — as untreated animals do.

A drug that blocks a certain type of receptor at the junctions between neurons reverses repetitive behaviors in a common environmental mouse model of autism, according to a study published 7 October in PLoS ONE1.

The drug, called 2-methyl-6-(phenylethyl)-pyrididine, or MPEP, inhibits the mGluR5 receptor, which uses the neurotransmitter glutamate for signaling. In 2007, researchers showed that dialing down mGluR5 activity can reverse the learning problems in a mouse model of fragile X syndrome, the most common inherited cause of autism.

Since then, several groups have begun testing mGluR5 inhibitors as therapies for fragile X or autism.

MPEP has been shown to improve autism symptoms in several mouse models of the disorder. For example, the drug alleviates repetitive behaviors in two inbred strains of mice with autism-like behaviors, BTBR and BALB/c. Puzzlingly, one study found that MPEP treatment makes a strain of normal mice, called Swiss Webster, less social.

In the new study, researchers tested the drug on mice whose mothers had been exposed to valproic acid (VPA) during pregnancy. Prenatal exposure to VPA, a common epilepsy drug, increases autism risk seven- to ten-fold in people2. In mice, VPA exposure during pregnancy results in offspring with social deficits, repetitive behaviors and abnormal brain waves.

The researchers treated VPA mice with MPEP and gave them several tests of anxiety and repetitive behaviors, including marble burying and self-grooming. Compared with untreated mice, those given MPEP show significantly fewer repetitive behaviors on both tests, the study found. The drug does not affect the animals’ anxiety or their general level of activity, suggesting that it would not have a sedative effect in people, the researchers say.

The study supports research on other animal models of autism showing that MPEP improves repetitive behaviors, the researchers say.