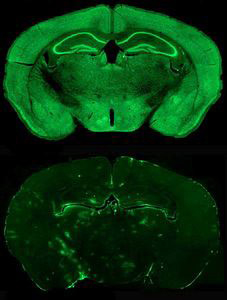 Light the way: Using a fluorescent assay, researchers screened for compounds that activate a silent version of the Angelman syndrome gene.

A cancer drug shows promise as a treatment for Angelman syndrome, according to a study published today in Nature1.

Angelman syndrome is a developmental disorder related to autism that is characterized by developmental delay, lack of speech, and seizures. It is caused by mutations in UBE3A, a protein that targets other proteins for degradation. As a result of a process dubbed imprinting, the paternal copy of UBE3A is normally silenced in neurons, and the protein is only expressed from the maternally inherited copy.

At the 2011 Society for Neuroscience annual meeting in Washington, D.C., researchers described an assay to identify drugs that can activate the functional but silent paternal copy of UBE3A and potentially treat Angelman syndrome.

Using their assay, the researchers identified a compound called topotecan that activates the expression of the paternal copy of UBE3A. UBE3A expression in spinal cord neurons persists for up to three months after drug treatment, they found.

Topotecan is approved for treating ovarian, small-cell lung and cervical cancers. It inhibits topoisomerases, molecules that assist in the winding and unwinding of the DNA helix.

The drug is one of 16 topoisomerase inhibitors that rescue UBE3A paternal gene expression, but does so at low doses, the study found.

When injected for two weeks into the brains of mice lacking the maternal copy of UBE3A, a nanomolar dose of topotecan induces UBE3A expression from the paternal copy in the hippocampus, striatum and the cerebral cortex, the study found. Only higher doses of the drug induce expression in the cerebellum, however, suggesting that more work is required to ensure that UBE3A expression is restored evenly throughout the brain.

Also, because topotecan may alter the expression of other imprinted genes, the researchers caution, it should not be used to treat Angelman syndrome until it undergoes rigorous clinical testing.