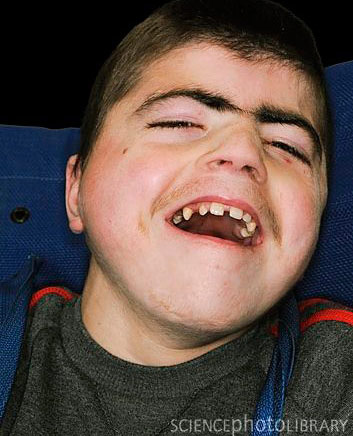 Distinct disorder: Children with Cornelia de Lange syndrome have a number of unusual physical features, including eyebrows that meet in the middle.

About 40 percent of individuals with Cornelia de Lange syndrome, a rare genetic disorder, also have autism, according to a study published inthe August issue of the American Journal of Medical Genetics Part A1.

This is a much higher level of comorbidity than previously thought, the researchers note, and they recommend that clinicians screen individuals with Cornelia de Lange syndrome for autism.

The syndrome is rare, affecting about 1 in 40,000 people. Mutations in three genes, NIPBL, SMC1A and SMC3, are known to cause the disorder, and more than half of individuals with the syndrome have a mutation in NIPBL. The disorder is characterized by unusual facial features such as thin eyebrows that meet in the middle, growth delays, intellectual disability and physical malformations, such as missing fingers.

The researchers screened 49 people with mild-to-moderate Cornelia de Lange syndrome using the Social and Communication Questionnaire (SCQ), a rapid screening tool for autism. They found 24 individuals who score as having autism on this questionnaire.

When the researchers applied the more widely used Autism Diagnostic Interview-Revised (ADI-R), however, they found that only 17 of these 24 have autism. The ADI-R also diagnosed autism in 4 of 12 individuals who did not score above the SCQ cutoff for autism.

Autism diagnosis among those with the syndrome is unaffected by age or gender. The NIPBL mutation shows an association with autism, but this effect is not statistically significant.