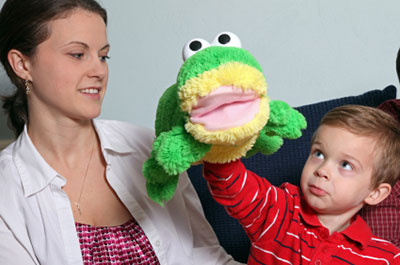 Play time: Children with autism are less likely than their peers to direct an adult’s attention to a toy.

Children with autism learn to name objects and imitate others before they are able to engage others’ attention, a pattern opposite to that seen in typical development. They also lag behind their peers in social communication, according to a study published 6 August in Autism1.

During the assessments, the children played in a room that had numerous toys: balloons, puppets, noisemakers and dolls. The researchers looked to see whether the children initiated joint attention — for example, by looking at a toy, then at an adult and then back at the toy — or responded to an examiner pointing to something.

The researchers also encouraged the children to imitate them, either by playing with an object or by performing an action such as opening or closing a fist. They also noted whether the children used words to refer to any of the toys in the room. Finally, they looked to see whether the children engaged with a doll, by putting it on a chair themselves or giving it a pacifier, for example.

The typically developing children generally accomplished these skills in a specific order — going from joint attention and object imitation at about 9 months to motor imitation at 12 months of age. By 15 months, all the children in this group showed joint attention, about 60 percent imitated movements, 43 percent played with dolls and 14 percent used language.

The toddlers with developmental disability tended to learn social communication skills in the same order as the typically developing children had. In contrast, the toddlers with autism imitated adults playing with an object first and lagged on motor imitation and initiation of joint attention.

Toddlers with autism may respond to bids for attention before initiating them because they don’t feel motivated to engage in social interaction, the researchers suggest.