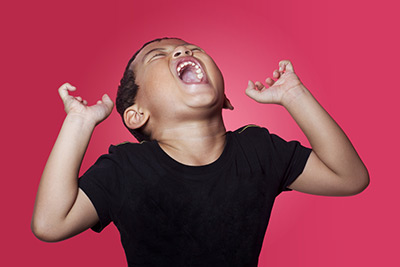 Acting out: Children who have both attention deficit disorder and autism tend to become easily upset or angry, according to their parents.

Children who meet the criteria for both autism and attention deficit hyperactivity disorder (ADHD) have more severe behavioral problems than do children with either disorder alone, according to three studies published in the past few months.

Autism and ADHD were mutually exclusive diagnoses in the DSM-IV, the previous edition of the Diagnostic and Statistical Manual of Mental Disorders. The DSM-5, released in May, allows a child to be diagnosed with both disorders simultaneously.

Some studies report that as many as 80 percent of children with autism also have ADHD.

In both studies, parents filled out the Autism Spectrum Disorders-Comorbidity for Children (ASD-CC), a 39-item questionnaire that assesses the severity of symptoms that often accompany autism, such as tantrums.

Children with both disorders have more severe tantrums and general behavioral problems than those with either disorder alone, the studies found. They are also slightly more likely to be anxious than are children with a single diagnosis.

Overall, children with ADHD alone have less severe symptoms than the other two groups, including how often they become upset or damage property. This suggests that the autism diagnosis is the primary contributor to tantrums, the researchers say.

This finding bolsters another result, published 25 April in European Child Adolescent Psychiatry. That study finds that among 711 children with ADHD, those with the most features of autism — as identified by the Social Communication Questionnaire — are the most likely to have behavioral problems and anxiety3.