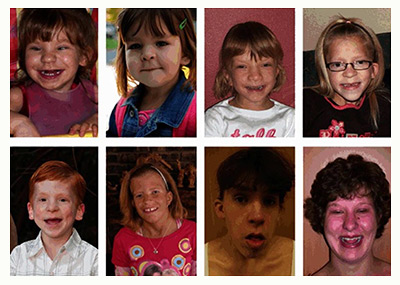 Alternative diagnosis: Roughly 10 percent of people with a diagnosis of Angelman syndrome may have a different disorder, such as Koolen-de Vries syndrome (shown above).

The nature of the mutation that leads to Angelman syndrome — a disorder characterized by speech impairment and developmental delays — affects the disorder’s presentation, reports a study published 19 March in Research in Developmental Disabilities1.

Genetic alterations that prevent the expression of UBE3A, a gene that helps control communication between neurons, can cause Angelman syndrome. Typically, the paternal copy of UBE3A is silenced in neurons by a process known as imprinting, and only the maternal copy is expressed. Problems with the imprinting process, deletions of the chromosomal region containing UBE3A or mutations in the gene itself can all cause the syndrome. But how different alterations affect the symptoms of this rare disorder is unclear.

The researchers assessed 42 Danish children with the syndrome, and found that the 30 children missing the UBE3A gene have more severe symptoms than those with mutations in the gene.

To investigate how the disorder changes with age, the researchers reassessed seven of the children with UBE3A deletions 12 years after the initial assessment. They uncovered modest but significant strides in the children’s language skills — in their abilities to both understand others and express themselves. However, even with improvement, the children did not develop language skills beyond those typically seen in 10-month-olds.

About 10 percent of people diagnosed with Angelman syndrome do not have a clear genetic cause, even with the availability of advanced genomic technologies. A study published 29 January in the American Journal of Medical Genetics2 encourages clinicians to consider similar disorders, which all present with speech difficulties and delays, when diagnosing these children.

For example, Koolen-de Vries syndrome has some characteristics in common with Angelman syndrome: developmental delay, intellectual disability, severe speech and language delays and a friendly, happy demeanor. However, people with Koolen-de Vries syndrome have more advanced language skills than those with Angelman syndrome, and distinctive physical features such as a broad forehead and unusually loose joints.