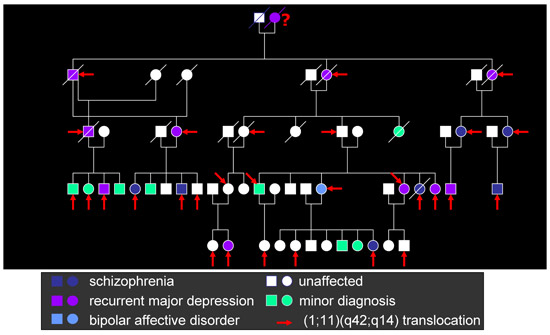 Researchers have uncovered a rare, seven-gene duplication in two brothers with autism and mild mental retardation1. The duplication lies on chromosome 1 and includes DISC1, one of the oldest candidate genes for psychiatric disorders.

Deletions and other variants in this gene have been linked to autism, as well as to schizophrenia and bipolar disorder, but this is the first time that scientists have tied a DISC1 duplication to autism.

The new report, published online 10 December in Clinical Genetics, is one of several investigations in the past year on DISC1’s role in autism. Other groups are using mouse models to track how changing the expression of the gene during different periods of development affects the animals’ brain pathology and behavior.

DISC1 encodes a protein that is expressed in the brain, and is thought to play a role in neurons’ growth and movement and in their ability to change the strength of their connections. The protein’s biological role in psychiatric disorders is not well understood, but the new findings suggest that too little or too much of it can disrupt crucial brain functions.

“You start to wonder whether some genes just have to be expressed at the exact right level, and that variations in one way or another just cause a problem in development,” says Daryl Scott, associate professor of molecular and human genetics, who was not involved in the new study.

In 1990, scientists first revealed a chromosomal rearrangement involving DISC1 — which stands for Disrupted in Schizophrenia 1 — in a large Scottish family affected by schizophrenia, major depression and bipolar disorder2. Since then, dozens of human genetics and animal studies have implicated DISC1 in psychiatric diseases, memory deficits and abnormal patterns of brain activity.

In 2008, a deep genetic screen of 97 Finnish families affected by autism and Asperger syndrome revealed short, repeated DNA sequences within the DISC1 gene in family members with an autism diagnosis. The researchers also found that a particular single nucleotide change in the gene is present in about 83 percent of family members with Asperger syndrome, compared with 78 percent of controls3.

Subsequent reports identified additional autism-linked variations in the gene. Last year, Scott’s team reported a large chromosome 1 deletion in a 3-year-old boy with an autism spectrum disorder4. The boy is missing DISC1 as well as DISC2 and TSNAX genes, both of which have been associated with neuropsychiatric disorders.

The boy inherited the deletion from a healthy mother, suggesting that other factors in the genome or environment can modify a DISC1 deletion’s effects, Scott says.

In the new study, scientists from University of Leuven in Belgium searched for small genetic deletions and duplications in two young brothers whose parents had requested genetic counseling. Both boys have been diagnosed with autism and mild mental retardation; one boy also has attention deficit hyperactivity disorder.

The brothers both carry a seven-gene duplication that includes DISC1 and three other brain-expressed genes: SIPA1L2, PCNXL2 and KCNK1. None of these has previously been implicated in autism, making them good candidates for future research, Peeters says.

The researchers then looked for DISC1 deletions and duplications in blood samples from 260 Belgians with autism. They found none, suggesting that alterations in the gene are relatively rare in people with the disorder.

“Rare variants like a disruption or duplication of the gene can be considered moderate risk factors for autism and thus have a large effect in a few families in which they appear,” Peeters notes. “However, these variants are very rare and therefore account for only a very small proportion of variance in autism at the population level.”

Sequencing larger numbers of children with autism might uncover additional mutations in DISC1. But until researchers find more cases, they can investigate specific variations in animal models, notes Mikhail Pletnikov, associate professor of psychiatry and neuroscience at Johns Hopkins University.

“Right now there’s increasing evidence that DISC1 may contribute to at least some autistic abnormalities,” Pletnikov says. “What those rare genetic mutations give us is an opportunity to study biology in cell and animal models.”

Like many disease risk genes, DISC1 produces a protein that has multiple functions — in DISC1’s case, neuronal signaling, proliferation and migration — depending on where and when it is expressed.

“All these different functions can be explained by the fact that at different time points DISC1 interacts with different proteins, participating in protein-protein networks of different configurations and compositions,” Pletnikov says.

Some groups have already altered DISC1 expression in mice to learn how it contributes to schizophrenia-like behaviors. In a study published 25 February in Neuron, for example, scientists created a mouse model with lower than normal DISC1 expression in the prefrontal cortex, an area of the brain responsible for planning and decision-making.

The team found that lowering DISC1 expression for a brief period during prenatal development inhibits neurons’ normal response to electrical stimulation in adulthood. Mutant mice also make less of the neurotransmitter dopamine. Taken together, the findings suggest that knocking down DISC1 expression leads to a disruption in neural connectivity comparable to what’s seen in schizophrenic brains, the researchers say5.

What’s more, these mutant mice cannot filter out unnecessary sensory information, behavior reminiscent of people with schizophrenia. But that deficit improves in the short term when the animals are given a dose of clozapine, a drug approved by the U.S. Food and Drug Administration for treating the disorder.

Pletnikov and his group have created a mouse model with a DISC1 mutation similar to the one carried by the original Scottish family. The researchers reported 5 January in Molecular Psychiatry that the specific brain and behavioral effects in the mice depend on the timing of DISC1 expression — that is, whether the mutant gene is expressed during prenatal development, postnatal development or both6.

Expressing mutant DISC1 prenatally shrinks the animals’ brains, whereas turning it on postnatally causes the mice to be less social as adults. When the mutant gene is expressed both before and after birth, it makes adult mice more aggressive.

Based on these initial results, Pletnikov says it’s possible that early postnatal expression of the mutant DISC1 causes features of autism, but that many more studies are needed to confirm this idea.

In their Molecular Psychiatry study, Pletnikov’s group expressed the mutant gene once either prenatally or postnatally. They plan to add more postnatal time points, such as before weaning, pre- and post-pubescence and adulthood. They also aim to study whether turning off expression of the mutant gene after postnatal development reverses behavioral and brain abnormalities.

Teasing apart prenatal and postnatal effects of the DISC1 mutation may eventually lead to the treatment of features of autism and other neuropsychiatric disorders. “To treat those prenatal-originated effects is difficult,” Pletnikov says. “[But] if we identify the effects related to postnatal mechanisms, then we have a lot better hope to target and treat them.”