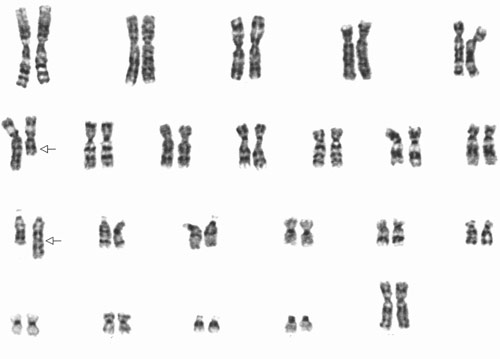 Balanced bases: DNA sequencing shows that when chromosomes exchange pieces (arrows), genes can lose their function even if no genetic information is missing.

Large-scale swapping of genetic material between chromosomes may play an important role in autism, according to a study published 27 April in Cell1.

Researchers sequenced DNA from 38 children with autism or other neurodevelopmental disorders who had balanced chromosomal abnormalities (BCAs), genetic alterations that arise when different chromosomes recombine, or exchange big chunks of DNA, during cell division. A portion of chromosome 2 may end up on chromosome 6, for example, and vice versa.

Scientists identify people who have BCAs through karyotyping, which involves photographing chromosomes that have been stained with dye. The staining gives each chromosome a distinctive banding pattern, so it’s obvious when pieces of chromosomes aren’t in their normal place.

To analyze these chromosome breaks in greater detail, researchers adapted a method called large-insert jumping libraries to help locate the breakpoints. With this technique, researchers randomly cut DNA into large fragments and sequence short stretches at the ends of the fragments. “You’re scanning for the presence of everything that should be in between,” says Gusella — but if the ends of the fragments aren’t what they should be, they know that a chromosome break or other genomic mishap has occurred somewhere in the middle.

“The methods that they’ve pioneered here can be used for many other genetic disorders” to explore the involvement of BCAs, says Aravinda Chakravarti, professor of medicine, pediatrics, and molecular biology and genetics at Johns Hopkins University School of Medicine in Baltimore, who was not involved in the work. “This goes way beyond autism.”

Gusella’s team focused their study on people already known to have BCAs. Participants were drawn from existing DNA banks that collect genetic material from people with autism and related disorders, including the Developmental Genome Anatomy Project and the Autism Genetic Resource Exchange (AGRE).

By sequencing chromosomal breakpoints, they cataloged 33 different genes disrupted by BCAs. They found that breakpoints often occur right in the middle of a gene, rendering that copy nonfunctional. In other cases, the BCA affects a regulatory sequence that lies outside of a gene itself, thereby altering levels of gene expression.

Some of the genes identified in the study, such as AUTS2 and FOXP1, are familiar from previous studies of autism-related genes. But 22 of the genes have never been linked to autism before.

To test whether the mutations they found in individuals were relevant to the broader population of people with autism, the researchers analyzed a large set of microarray data from 19,556 people with neurodevelopmental disorders, including autism, and 13,991 controls without these conditions.

They found that the group with neurodevelopmental disorders has more copy number variations — duplications or deletions of segments of DNA — affecting the genes identified in the study compared with controls. Similarly, analysis of data from past genome-wide association studies of autism, in which the genomes of many people are scanned to find genetic associations with the disorder, showed that people with autism have more common variations in BCA-identified genes than they do in other parts of the genome. The same is true for schizophrenia.

One of the new genes identified in the study, CHD8, also emerged in exome-sequencing studies, which look only at the protein-coding parts of the genome, of children with autism published within the last month.

“Before that, we did not have one solid lead on the gene CHD8,” says Jonathan Sebat, associate professor of psychiatry and cellular and molecular medicine at the University of California, San Diego, who was not involved in any of the studies. Yet now, “it would be pretty hard to argue that those mutations are not associated with autism or intellectual disability,” he says.

Other autism candidate genes suggested by the BCA analysis are found in chromosomal regions, such as 2q33.1 and 9q34.3, involved in microdeletion syndromes. These neurodevelopmental disorders arise when segments of DNA several genes in length go missing. “We’re finding that you can delete one gene in that region and almost recapitulate that entire phenotype,” says Michael Talkowski, instructor in neurology at Massachusetts General Hospital in Boston and a member of the research team.

Another group of genes disrupted by BCAs has been linked to psychiatric disorders such as schizophrenia, but not to autism. In this case, the researchers found that people with autism had BCAs affecting some genes that have been previously identified as having common variants linked to schizophrenia.

The new study raises the possibility that the severity of a mutation, be it a single-letter change to the genetic code, a translocation or a deletion, influences which disorder an individual will develop. For example, a gene disrupted through a BCA, causing a severe loss of function, might contribute to autism, while a milder change like a sequence variation could contribute to an adult-onset disorder, such as schizophrenia. As Chakravarti puts it, “How you break a gene is just as important as where you break a gene.”

Indeed, it’s not yet clear how unique some of these mutations are to autism. Susan McGrew, associate professor of clinical pediatrics at Vanderbilt University in Nashville, who was not involved in the study, points out that half of the participants who had BCAs had received an autism diagnosis, while the remainder were classified as having a neurodevelopmental disorder, though many of them had symptoms of autism. “We don’t know that this is really specific to autism, because they just don’t have that kind of information on their patients,” she says. She adds that the results should be confirmed in a better-characterized population.

Talkowski hopes to use the jumping libraries method to assess the frequency of BCAs in a large group of people with autism. Previous studies have suggested that they are found in about 1.3 percent of people with autism, which is about 6 times more often than they occur in typically developing controls. But Gusella says that is probably an underestimate, since other BCAs likely exist that are too small to be seen on a karyotype.

The findings highlight the importance of karyotyping, a test that is relatively old and low-tech. Instead, a newer technology called microarrays, which can detect duplications or deletions of DNA too small to be seen in a karyotype, are increasingly being used in both research and clinical practice.

But “microarray analysis would not pick up these patients” as having autism-related chromosome abnormalities, says McGrew. “You could only pick those up on a karyotype.”

McGrew, who has advocated for routine microarray analysis of those newly diagnosed with the disorder, says “perhaps this is providing evidence that both tests should be done.”