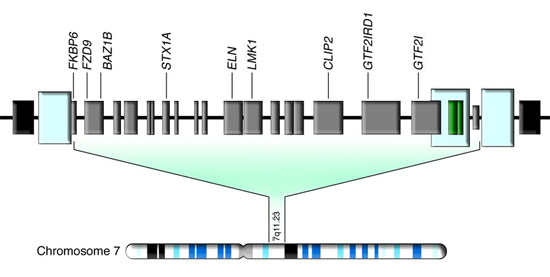 Double jeopardy: Deletions in the 25-gene segment of 7q11.23 cause Williams syndrome; duplications of the same region have been linked to autism.

Individuals who carry an extra copy of the genetic region missing in those with Williams syndrome have language impairments and other autism-like social difficulties, according to a wave of new research on this duplication syndrome.

Williams syndrome is caused by a deletion of a segment of DNA containing about 25 genes in the chromosomal region 7q11.23. The syndrome is characterized by some impairments — such as difficulties in having meaningful conversations — that resemble autism and others, such as a tendency to approach other people, even strangers, that seem to be the opposite of autism.

In the past year, scientists have been finding that individuals carrying duplications of the same region also have some autism-like features. Like children with autism, they struggle to speak, and lag years behind their typical peers in language production.

Although experts disagree on the extent to which these symptoms mimic autism, the overlapping features in cases of both deletion and duplication may indicate problems with the same genes or regions of the brain, they say.

“It may be that it’s just the dosage of the genes that matters, whether it is too much or too little,” says Nathalie Van der Aa, a clinical geneticist at the University of Antwerp in Belgium.

Last year, Van der Aa’s team described 14 cases of the 7q11.23 duplication syndrome1, doubling the number of cases documented since 20052. She had asked other genetics clinics in Europe to look out for 7q11.23 duplications after she saw two disparate cases: one child with autism-like features and another with epilepsy and moderate mental retardation.

Reviewing reports from other clinics, Van der Aa found that all 14 children have problems speaking. “They seem to be understanding what is said appropriately, but when they have to produce language they get very frustrated and it doesn’t seem to come,” she notes.

Other features are less consistent, however. Seven of the children have mild or moderate mental retardation, and six have either been formally diagnosed with autism or have autism-like features, such as poor eye contact or trouble with social interactions. Because of the study design, however, Van der Aa does not know how different clinics assessed autism.

Other experts say these social difficulties bear only a superficial resemblance to autism.

“This is nothing like autism,” says Carolyn Mervis, professor of psychology and brain sciences at the University of Louisville. “[Children with the duplication] do make good eye contact with and interact with people they’re comfortable with.”

Mervis was part of the team that in 2005 identified the first 7q11.23 duplication case. Her team has examined an additional 27 children with the duplication, but their findings on the core clinical features are not yet published.

She and her colleagues are studying children who were originally seen by clinicians for a variety of problems, including poor eye contact, anxiety and language impairment. Mervis’ team has also noted a range of speech impairments in participants carrying the duplication, ranging from speech delay to childhood apraxia of speech, a condition marked by persistent difficulties in forming and correctly ordering speech sounds.

Mervis is skeptical of the autism diagnoses given to many of the children in her group by other specialists. She says these children are highly anxious about being separated from their parents, which may be why they have difficulty joining a group or interacting with a clinician. Unlike those with autism, she adds, children with 7q11.23 duplications are skilled at pretend play and communicating with gestures.

Her findings square with a 2007 study reporting that people with the duplication tend to be referred to a clinic for autism, but don’t meet diagnostic criteria3.

There is extreme variability among individuals carrying the 7q11.23 duplication, which suggests that other genetic factors may modify symptom severity. The symptoms may also evolve over time. For example, Mervis estimates that up to 30 percent of her group inherited the duplication from parents who, though they speak normally, had a history of speech problems during childhood, and still have trouble when tested with tongue twisters. These parents also have an abnormally high rate of social phobias, similar to the anxiety problems of their children, she says. Similarly, 9 of the 14 children in Van der Aa’s study inherited the duplication from a parent.

In the meantime, researchers are beginning to sort out the downstream effects of genes in the 7q11.23 region. Brain imaging studies are focusing on the atypical brain structures and patterns of activation seen in people with Williams syndrome4,5, and mouse models may link individual genes to aspects of the syndrome6. For instance, researchers have discovered that the elastin gene, located in the region, is responsible for the heart problems associated with Williams syndrome.

It’s not yet clear which genes cause specific cognitive and behavioral features of the disorders, notes Lucy Osborne, associate professor of medicine and molecular genetics at the University of Toronto.


“Studying these disorders will give huge insight into genes that are clearly very important for behavioral and cognitive development,” she says.