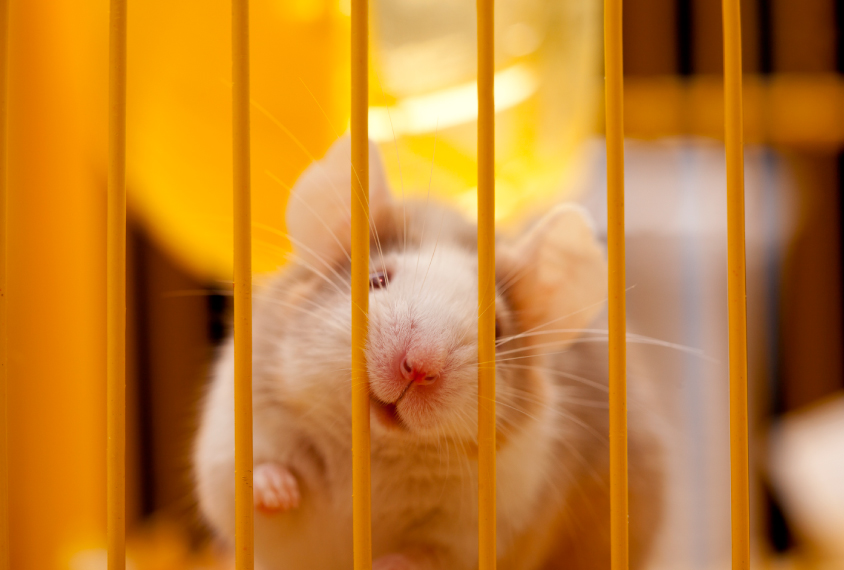 Sound strategy: Mice learn to lick a water spout in response to a tone.

Female mice may compensate for the loss of a piece of chromosome 16 better than male mice do: Females generalize their responses to sensory cues, whereas males learn specific responses.

That’s the upshot from an unpublished report presented yesterday at a meeting at the Cold Spring Harbor Laboratory in New York.

The mice lack one copy of DNA on a stretch of chromosome 16 called 16p11.2. About one in three people with this deletion has autism.

The findings may provide clues to why more boys than girls with the deletion have autism. The female mice’s tendency to generalize their responses may be an adaptation to compensate for the mutation’s effects — much as women with the condition often compensate for their problems, says Jacqueline Giovanniello, a graduate student in Bo Li’s lab at Cold Spring Harbor Laboratory, who presented the findings.

“There’s this idea of the female protective effect, that females kind of fly under the radar and don’t get diagnosed with autism,” Giovanniello says. “This, in theory, could be one of the ways that they’re compensating — by latching on to a particular coping strategy, and just applying it to all situations.”

The results also support the idea of a biological basis for the female protective effect.

“These data definitely support the overall theme from the epidemiological and preclinical literature that the female brain is indeed able to compensate for the impact of genetic variants in ways the male brain can’t,” says Nicola Grissom, assistant professor of psychology at the University of Minnesota, who was not involved in the study. Grissom has found sex-specific deficits in 16p11.2 mice using a different strain of mice and other tests.

Giovanniello and her colleagues trained mice to associate the release of water from a spout with a low-pitched tone. Once the mice learn to lick the spout in response to the tone, the researchers alternate the tone with one of a higher pitch. If the mice lick in response to this second tone, they receive an irksome puff of air on their faces.

Control mice learn this lesson soon enough, as do male mutants that lack a copy of the 16p region.

By contrast, female mutants lick frequently even when they hear the second tone, despite the air puffs. (The researchers made sure the mice don’t have a problem with hearing the difference between the tones.)

The females also have trouble on a related task, in which a low tone is followed by a painful foot shock. Control mice and male mutants mice freeze for longer in response to the low tone than to a higher one. But the females show no difference in their response to the different tones.

“They are generalizing, or responding in the same way, to both cues, instead of being able to accurately inhibit one of their responses,” Giovanniello says.

The female mutants show unusually high activity in the neurons of the amygdala, a brain region involved in sensory responses.

The researchers are testing whether dampening this activity normalizes the female mutants’ behavior.