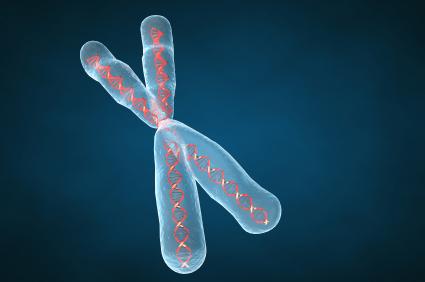 Complex connection: Genetic analysis of nearly 10,000 children suggests the link between chromosome 16 and autism is far from straighforward.

Deletions or duplications of a specific segment of chromosome 16 ― which has previously been fingered as a ‘hotspotʼ for autism susceptibility ― may be present in a surprising number of people who don’t have autism, according to researchers presenting preliminary data today at the annual meeting of the Child Neurology Society in Santa Clara, California.

In this latest study, researchers at Signature Genomics Laboratories in Spokane, Washington, scanned the genomes of 9,773 individuals ― a majority of whom are children ― between November 2007 and October 2008. The list includes 820 samples that came to the lab with labels of autism spectrum disorders.

The researchers are reporting today that of the 9,773 individuals, 78 ― or about 0.8 percent ― carry a deletion or duplication in the 16p11.2 region. At least 9 of the 78 have autism or autistic features ― roughly 1 percent of the 820 individuals known to be on the autistic spectrum. That finding is consistent with previous reports.

But at least 16 of the 78 cases, or about 20 percent, have neither autism nor features of the disorder, the researchers say. There is not yet enough clinical information available on the remaining 49.

“The issues are more complicated than what was presented [in previous reports],” says Lisa Shaffer, president and chief executive officer of Signature Genomics. “I don’t think it’s simply a ‘predisposition-to-autism’ locus ― something else is going on.”

As a commercial diagnostic lab, Signature Genomics receives blood samples from children with a variety of health problems, including heart defects, seizure disorders and developmental delay. The researchers usually have very little information about a patient’s symptoms, secondary disorders or medical history.

“This is one of the problems of trying to pool data in a clinical lab like ours,” Shaffer says. “If the form that comes in with the sample just says ‘heart defect’ on it, then we’d never know if the child also had autism.”

For the 78 samples identified with 16p11.2 abnormalities, the company tried to contact the referring doctor for additional medical information, but 4 of the patients are too young to test for autism and 49 still lack further clinical information.

“The strength of this is in the numbers: they have a lot of cases that they’ve assessed over the years,” says Steve Scherer, a senior scientist at the Hospital for Sick Children in Toronto. “The caveat is that they really don’t have any well-ascertained clinical data. So you have to take the quality of the clinical assessment and autism diagnosis with a grain of salt.”

In the past few years, researchers have linked at least ten chromosomal regions to autism and related conditions4. The strongest, found a decade ago, is a relatively large segment on chromosome 15 ― known as 15q11-13 ― that is duplicated in about 1 to 3 percent of all cases of autism5.

But research has more recently focused on 16p11.2 which, between December 2007 and February 2008, three independent teams, analyzing more than 20,000 samples in total, linked to autism.

“The timing was not planned, it was a race. I kid you not, we were all racing to get these data out,” says Susan Christian, a research associate at the University of Chicago, whose group was the first to announce the link.

The replicated findings are “very robust,” adds Scherer, whose team was the second to publish. “All of the data was consistent ― it’s always nice when papers come out that validate each other.”

Still, Signature Genomics’ data suggests that the 16p11.2 variation may pop up in a much broader range of phenotypes than previously believed.

In the 47 16p11.2 deletions in Signature Genomicsʼ samples, 15 are de novo and 3 maternally inherited; 29 are of unknown origin unknown because parental samples are unavailable. The company is trying to find the missing family data to better estimate the frequency of duplication or deletion in the general population.

“At minimum, what will still need to be done is for a very detailed phenotype to be compared to a very detailed genotype,” notes Donna Martin, associate professor in pediatrics and human genetics at the University of Michigan Medical Center, who has no ties to Signature Genomics. “Then we’ll need to be getting that information from parents and siblings to see if this is a population polymorphism, a risk factor or causative.”

Other teams are also trying to characterize people who carry a 16p11.2 deletion or duplication. David Ledbetter, professor of human genetics at Emory University School of Medicine, is trying to establish a multi-center consortium to compare detailed phenotypes of these samples.

Geneticists are also working on fully sequencing the 16p11.2 region, in hopes of pinpointing individual genes that, when missing or duplicated, may give rise to autism. “There’s a lot of people sequencing the genes and looking for smaller mutations,” Scherer says. “But so far, nothing’s been reported.”