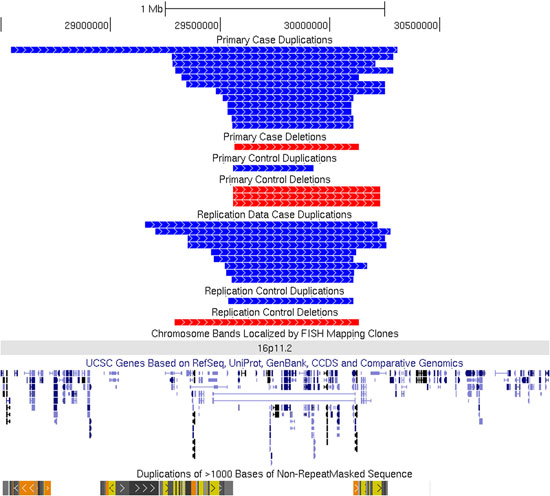 Rearranging risk: Duplications in the 16p11.2 region have been associated with schizophrenia, and deletions with autism.

Small duplications in chromosomal region 16p11.2 increase the risk of schizophrenia about 14-fold, confirming the mutation’s importance in the disorder, according to a study published online 25 October in Nature Genetics1.

In the past few years, mounting evidence has pointed to the importance of copy number variations (CNV) — deletions or duplications in chunks of DNA — in autism, schizophrenia and other psychiatric disorders2. Deletions in the 16p11.2 region are seen in roughly one percent of people with autism, making it one of the most frequent CNVs implicated in the disorder to date3.

“This is the first time where you can see a duplication associated with schizophrenia and a deletion associated with autism in a very convincing way. There are no other loci where it’s quite so clearly apparent,” says lead investigator Jonathan Sebat, associate professor of genetics at Cold Spring Harbor Laboratory in New York.

Last year, Sebat’s group reported the presence of the 16p11.2 duplication in two people with childhood-onset schizophrenia4, but it wasn’t clear whether the association was real: The two patients could have been misdiagnosed, or perhaps they eventually met criteria for autism, Sebat says.

The group also performed a meta-analysis of data for multiple disorders, showing that the microduplication is associated with schizophrenia, bipolar disorder and autism. In contrast, the microdeletion is linked only with autism and developmental disorders.

The group also found that individuals with the microdeletion have larger heads than do those who carry the microduplication. Some people with autism are known to have bigger heads5.

The findings are conclusive on the role of the duplications in schizophrenia, but the results of the meta-analysis should be interpreted with some caution, says Bernard Crespi, a professor of evolutionary biology at Simon Fraser University in Canada who was not involved with the work.

That’s because the analysis grouped together people with autism and developmental delays, Crespi says. “You can’t combine those two into a coherent category,” he says. “Developmental delay is a vague category and could include intellectual disability or even premorbidity for schizophrenia.”

A separate group of scientists has also found similar head circumference differences between groups of children with the 16p11.2 deletion or duplication. The study, led by James Lupski, vice chair of molecular and human genetics at Baylor College of Medicine, incorporates other clinical characteristics of these children. Lupski declined to reveal details because the results are unpublished.

Drilling down more specific phenotypes in people with these CNVs will prove challenging, researchers say. The CNVs are not always penetrant, for instance, meaning that people who carry them might not show symptoms of the disorder.

Sebat and his colleagues examined the families of five people with the 16p11.2 duplication. Besides schizophrenia, relatives who carry the duplication have bipolar disorder, depression or no mental illness at all.

CNVs in other areas of the genome, on chromosomes 226, 157 and 18, have been reported in schizophrenia, autism, epilepsy and even defects in heart development. Lupski and others are studying how the same CNV can lead to such a broad range of phenotypes.

“It suggests to us that there are interactions with other loci,” Lupski says. “What also could be important is what’s on the non-rearranged copy. In this case, you have a duplication, but maybe it’s a combination of a variant on the other allele that may determine whether you have condition A or condition B.”

Looking at additional features, such as brain structure and function, may also reveal a clearer connection between genotype and phenotype, Sebat says, although he and his collaborators have not yet had success in that area based on unpublished brain imaging data from two people with schizophrenia.