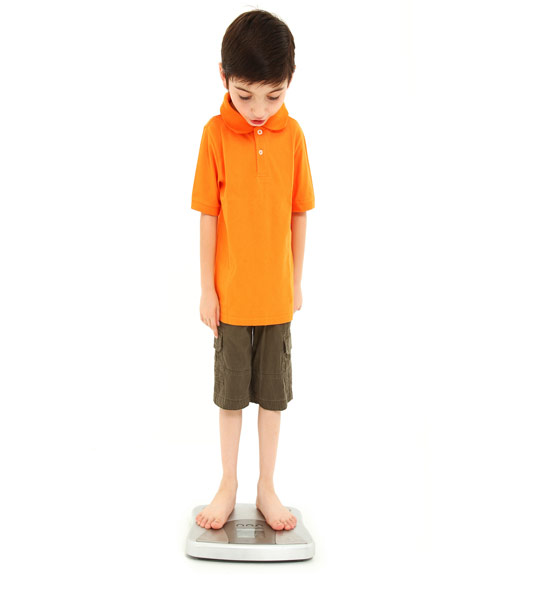 Too thin: Children, particularly boys, with a duplication of chromosomal region 16p11.2 fail to gain weight normally in early childhood.

Too thin: Children, particularly boys, with a duplication of chromosomal region 16p11.2 fail to gain weight normally in early childhood.

Individuals with a duplication of a chromosomal region associated with autism and intellectual disability are at much higher risk for low birth weight and restricted eating, leading to extreme thinness1. They also have smaller-than-average heads, or microcephaly.

The findings, reported yesterday in Nature, are the inverse of earlier studies showing that a deletion of the same chromosomal region, 16p11.2, increases the risk of obesity and macrocephaly, or bigger head size2,3.

Researchers first identified this region as a potential risk factor for autism in 20084. It was one of the first copy number variations (CNVs) — deletions or duplications of genetic material — to be associated with autism.

These sorts of CNVs can arise spontaneously, or de novo, in the sperm, ovum or fertilized egg, or be inherited from parents who may or may not show signs of the disorder.

In the new study, parents and children who carry the duplication all weigh less than average for their age and gender. Males are more severely affected, with lower body mass index (BMI), a measure of body fat based on height and weight.

“In the parents, the phenotype is a little less severe because there are a majority of women transmitting the duplication,” says lead investigator Sébastien Jacquemont, physician and researcher at Service de Génétique Médicale in Lausanne, Switzerland. “The women also have less intellectual disability and less of this bizarre food intake issue.”

Individuals who carry this duplication appear to be easily satiated at mealtimes, he says. “They may take three spoonfuls and they are done.” By contrast, many of those who have a 16p11.2 deletion are hyperphagic — always hungry and always eating — and consequently obese.

“I’m pretty excited about the study,” says Raphael Bernier, assistant professor of psychiatry at the University of Washington in Seattle. “For a long time we’ve struggled with the notion of what are the differences in deletion versus duplication. They’ve picked a topic that can actually look at this whole notion of mirror etiologies very nicely.”

In the study, a consortium of European researchers identified 138 individuals who carry a duplication of the 16p11.2 region. Some of the same researchers reported in Nature last yearthat individuals with a deletion of the region are at a higher risk of obesity. A second team reported similar results in the same issue of the journal.

The researchers cast a wide net in the new study, assembling a clinical group of 77 individuals who carry the 16p duplication and are diagnosed with a developmental disorder, intellectual disability orapsychiatric disorder. They supplemented this group with 35 individuals from the general population who carry the variant but have not been diagnosed with any disorder. That number includes 15 close relatives of the clinical group, including 11 parents who transmitted the duplication to their children.

“The number of participants in the report is impressive, making the results robust,” says Wendy Chung, director of the clinical genetics program at Columbia University. Chung has long studied obesity and metabolism, and heads the Simons Variation in Individuals Project. This initiative, sponsored by SFARI.org’s parent organization, aims to fully characterize individuals with a deletion or duplication of 16p11.2.

More than 25 percent of individuals in the clinical group have microcephaly. Individuals in both groups have lower than average body weight and BMI. A BMI of less than 18.5 is considered underweight. Adults in the study had more than eight times the average risk of being at or below that mark.

“Body mass index is a relatively crude tool, so it will be interesting to see the results of mechanistic studies to define what causes this difference,” says Chung.

Half of the boys under 5 years of age in the study were underweight and would meet diagnostic criteria for a ‘failure to thrive.’ Also known as faltering growth, this condition refers to children in the lowest fifth percentile of weight for their age and height.

Combined with the earlier findings on 16p and obesity, the study suggests that, for these individuals at least, eating behavior is not under conscious control. “It’s actually a complex phenomenon that is very tightly regulated,” says Jacquemont.

The study may also help researchers understand other mirror syndromes, most intriguingly, autism and schizophrenia, says Bernier, a principal investigator for the Simons Variation in Individuals Project.

Small duplications in 16p11.2 are believed to increase the risk of schizophrenia by 14-fold. The two disorders similarly share many other risk regions and genes.

Understanding gene dosage and its effect on clinical features is a critically important piece of the puzzle, Bernier says. Full duplications and deletions of the 16p11.2 region span 28 genes. “We need to find folks with overlapping but different deletions so we can really try to pinpoint what’s going on with any one of these genes.”