Children with autism found to rely on sight-sound synchrony 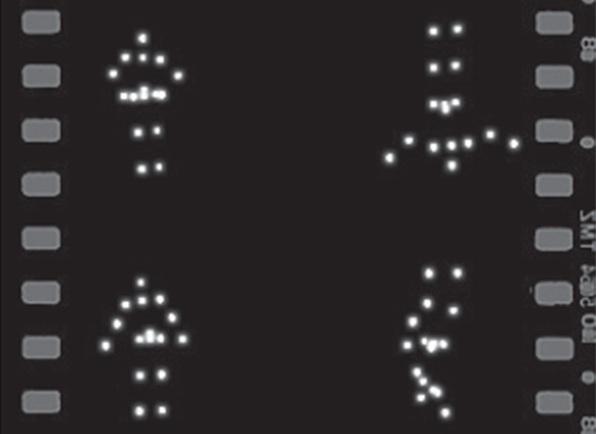 Right side up: Toddlers with autism pay no more attention to upright figures than they do to upside down ones &mdash; except when the pictures are accompanied by highly synchronized sound.

Most young animals, from newly hatched chicks to 2-day-old humans, are exquisitely sensitive to the movements of other animals1. But 2-year-old children with autism don’t pay special attention to this so-called ‘biological motion’, according to a study published today in Nature 2.

Unlike healthy children of the same age, toddlers with autism show no preference for scenes of a purely social nature — such as the waving arms and cooing noises of an adult playing ‘peek-a-boo’ — compared with the same scenes shown upside down.

Children with autism instead pay more attention to scenes in which large movements are perfectly synchronized with loud noises, such as the pronounced hand claps of a ‘pat-a-cake’ game, the study found.

In contrast, healthy toddlers always favor biological motion: they look at the upright scenes more than the upside-down scenes, regardless of whether the scenes contain high levels of audio-visual synchrony.

That children with autism have heightened sensitivity to audio-visual synchrony “really caught us by surprise,” says lead investigator Ami Klin, director of the Autism Program at the Yale Child Study Center.

These results may explain an earlier report by Klin’s team that unlike healthy children, who fixate on other people’s eyes, 2-year-olds with autism prefer to look at their mouths3.

“The question was, why in the world would people with autism focus on the mouth? And now [Klin] has got a really neat answer: the mouth is a place where sound is synchronous with the motion of the lips,” says Maggie Shiffrar, professor of psychology at Rutgers University in New Jersey.

“Now that they’ve identified what people with autism are really good at, it’s a huge advance because you can design treatments that take advantage of that,” Shiffrar adds. For instance, researchers could design behavioral treatments that pair audio-visual synchrony with important social information.

The study suggests that in children with autism, certain brain mechanisms diverge from the normal path very early in development, says Klin. Children who don’t have the ability to process social information may rely on these ‘physical contingencies’, such as audio-visual synchrony, to learn about the world.

The precise timing of developmental divergence could account for the diverse spectrum of behaviors on the autism spectrum — an idea that Klin is testing by looking for impairments in biological motion perception and other measures of social engagement in infant siblings of children with autism.

In 1973, Swedish psychophysicist Gunnar Johansson attached reflective patches to a dozen joints of one of his assistants, and then filmed the assistant while walking, running, dancing and making other movements in a dark room. When Johansson played the tape, which showed nothing but moving points of light, to a group of naïve observers, they easily discerned the various movements4.

‘Point-light animations’ of this kind have since been used in hundreds of studies showing biological motion perception in humans, dolphins, cats, chickens and many other species. For example, a 1982 study found that 4- and 6-month-old babies tend to look at a point-light animation of a person running rather than at random movements of the same number of lights5; a report last year found this preference for biological motion in infants just 2 days old.

Because attraction to biological movement is found across the animal kingdom and emerges very early in life, the behavior is probably crucial to our evolutionary survival.

In 2002, Klin and his colleague Warren Jones serendipitously found the same pattern in one 15-month-old girl with autism, Helen***8. In their experiments, the researchers tracked Helen’s precise eye movements while she watched a split screen of two point-light animations: one of an adult playing peek-a-boo, and the other of the same animation flipped upside-down and played in reverse. At the same time, Helen heard an audio track of the adult’s voice that matched the upright version.

Unlike typically developing infants, Helen did not prefer the upright animation, which conveyed biological motion, over the inverted one, which did not.

The researchers repeated the experiment with several different animations, one of which, the pat-a-cake animation, elicited very different results. The animation showed a singing adult playing the popular children’s hand-clapping game. On these trials, Helen looked at the upright animation 93.1 percent of the time — leaving Klin and Jones scratching their heads.

They re-watched the tapes showing Helen’s eye movements, zooming in on the clapping region of the animation. Her eyes had found that spot on every clap.

To see if attraction to this physical contingency would hold up in a larger group of children with autism, the researchers tested 76 2-year-old children: 21 with autism, 16 with developmental delay but not autism, and 39 healthy controls.

When watching the pat-a-cake animations, however, the autism group looked at the upright figure 65.9 percent of the time, significantly more than at the inverted figure. The pattern for the two control groups remained the same.

“The increased salience of the physical contingencies is very interesting and will, I think, motivate a number of future studies,” says David Simmons, lecturer in psychology at the University of Glasgow.

Some people with autism can quickly find tiny figures hidden in complex visual scenes, for instance, and others are extremely sensitive to normal sounds — both of which could be attributed to deficits of low-level sensory processing in the brain.

“Sensory processing in [autism] is characterized by curious peaks and troughs in performance,” Simmons says. “My view is that biological motion is special, but not so special that it is completely independent of low-level motion-processing mechanisms.”

For scientists interested in the roots of social behavior, the study is intriguing because it shows that children with autism do not orient toward human movement at such a young age.

“Given how early it is, there’s just no doubt that that perceptual deficit is causing some social deficits later on,” Shiffrar says.

Imaging studies have shown that the superior temporal sulcus, a long fissure on the brain’s temporal lobe, is involved in processing biological motion and in representing the intentions of other people. Some studies have found that people with autism show abnormally low activation of the region; one study reported that the level of dysfunction in the region correlates with the degree of their social impairment9.

In collaboration with Kevin Pelphrey, a neuroscientist at Yale who studies the region’s function in autism, Klin and Jones are launching imaging studies of siblings of children with autism to find out whether activation of the region changes as the children grow older.