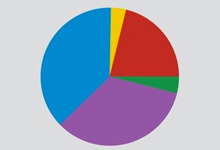 Converging evidence: Genetic alterations, such as deletions of the 22q11.2 chromosomal region, can increase risk for multiple disorders, including schizophrenia (red) and autism (blue).

Individuals who have childhood-onset schizophrenia carry more DNA deletions and duplications associated with other disorders, such as autism, than their unaffected siblings do. The unpublished research was presented 16 January at the Salk Institute, Fondation IPSEN and Nature Symposium on Biological Complexity in La Jolla, California.

The findings are part of a 20-year study of childhood-onset schizophrenia, a rare disorder in which symptoms such as hallucinations and disorganized speech and behavior begin before age 13. Typically, schizophrenia develops in young adulthood, but the 126 participants in this study were diagnosed on average around age 10.

“While I thought it was rare, it’s vanishingly rare,” says lead investigator Judith Rapoport, chief of the Child Psychiatry Branch at the National Institute of Mental Health in Bethesda, Maryland.

Copy number variations are deletions or duplications of relatively long stretches of DNA. Rapoport reported at the meeting that many of the CNVs associated with childhood-onset schizophrenia are the same as those that crop in autism.

The researchers combed through 25 large studies of autism, adult-onset schizophrenia, intellectual disability and epilepsy to select 48 large, rare CNVs associated with those disorders.

They found that 12 percent, or 15, of the individuals with childhood-onset schizophrenia carry a CNV associated with one of these disorders, compared with 4 percent of their unaffected siblings. Three of the participants have two of the CNVs, and none of the unaffected siblings do.

“The biology is defying our efforts at categorization,” says Matthew State, professor of genetics and psychiatry at Yale School of Medicine, who was not involved in Rapoport’s study. “The idea that a change in the genome supplies a [psychiatric] diagnosis is, I think, out the window.”

Rapoport and her colleagues also scanned genetic material from 81 children with a variety of serious impairments — developmental delays, behavior problems and other psychiatric disorders — who had been evaluated for childhood-onset schizophrenia but do not have the disorder. In this group, too, 12 percent carry at least one of the disorder-associated CNVs.

State presented a similar pattern of findings from the Simons Simplex Collection, a repository of genetic and clinical data from families in which only one person has autism. The collection is funded by the Simons Foundation, SFARI.org’s parent organization.

In 2011, State and his colleagues analyzed data from members of more than 1,000 families and found that CNVs in the 7q11.23 and 16p11.2 regions of the genome are associated with autism risk.

In their latest analyses, from all 2,700 families in the collection, “a bunch of other spots are coming up,” State says. These include regions of chromosome 1, 15 and 22 that have been associated with schizophrenia and intellectual disability. “It’s very hard to think of a region that’s come up that doesn’t have risk for another disorder,” State says.

The overlap is far from straightforward, however.

For example, five of the CNVs in Rapoport’s study had previously been linked only to intellectual disability. But the participants in the study all have normal or even high intelligence quotients.

Rapoport is planning to look for the same 48 CNVs in 100,000 children treated at the Children’s Hospital of Philadelphia for a variety of other, non-psychiatric problems.