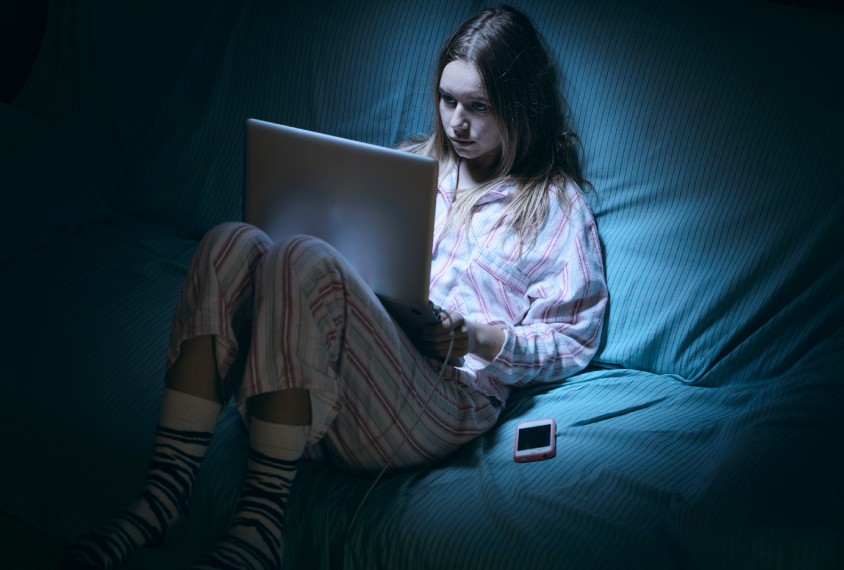 Keeping up: Autistic children may be at increased risk of experiencing hypomania symptoms, such as lack of sleep, in adolescence.

Children with autism traits tend to show agitation, excitability, decreased sleep and other signs of hypomania in adolescence, according to a new twin study. The association is higher in identical twins than in fraternal twins, the researchers also found, suggesting that genetics plays a role.

Hypomania in adolescence may signal a general vulnerability to mental health issues, or it could be an early sign of bipolar disorder — a condition generally diagnosed in adults that is marked by ‘low’ states of depression and ‘high’ states of mania.

People with autism are more likely than those without to have psychiatric conditions, and up to 11 percent have bipolar disorder. But there has been little research on hypomania in autistic people.

The new findings suggest that autistic people and their caregivers should keep an eye out for hypomania, especially if more research confirms that it foreshadows other mental health problems, says study investigator Mark Taylor, a researcher in psychiatric epidemiology at the Karolinska Institutet in Stockholm, Sweden.

“We know that autistic people are really vulnerable to developing mental health problems,” Taylor says. “If you talk to lots of autistic people, they’ll say this is one of the things that makes their life the most challenging, so anything we could do to intervene sooner could be helpful.”

The results also support the overlap between autism and bipolar disorder observed clinically and in genetic studies, says Natasha Marrus, assistant professor of psychiatry at Washington University in St. Louis, Missouri, who was not involved in the work. In her own practice, many autistic people have traits aligned with hypomania, a family history of bipolar disorder or both.

“When I talk to patients, I will often see traits or behaviors that remind me of manic syndromes,” she says. “So it’s interesting to see that at the twin study level you can find some evidence for this.”

The researchers analyzed data collected from 13,533 pairs of twins born after 1991 in Sweden. Parents rated the twins’ levels of autism traits at age 9 or 12 and hypomania symptoms at ages 15 and 18. (Because not all of the twins have reached their teenage years, the current study includes only 3,852 15-year-old pairs and 3,013 18-year-old pairs.)

The results suggest there is a genetic link between autism and hypomania. But levels of hypomania also varied independently of autism traits; genetic factors accounted for only 6 to 9 percent of the variance.

The findings were published in Psychological Medicine in April.

Autism and hypomania may share some genetics, but it’s also possible that autism exerts an influence on a genetic predisposition to hypomania over time, says John Constantino, professor of psychiatry and pediatrics at Washington University in St. Louis, who was not involved in the work.

“Autistic traits can actually make other kinds of psychopathology worse,” Constantino says. “That’s a common clinical observation, and that phenomenon would be expected to show a kind of genetic overlap.”

The team would need data on autism and hypomania at all time points to tease out that sort of causality, Taylor says.

The work is “impressive,” says Mohammad Ghaziuddin, professor of psychiatry at the University of Michigan in Ann Arbor, who was not involved in the work. But because hypomania is difficult to accurately assess in adolescence, and because its link to bipolar disorder is unclear, clinicians and families should be cautious about interpreting the findings, he says.

Many of hypomania’s traits — sleep disturbances, impulsivity, risk-taking — are common in adolescents, and may be even more so in those with autism, particularly if they also have intellectual disability, Ghaziuddin says. And over-diagnosing hypomania might lead to unnecessary prescriptions for drugs such as antipsychotics, he says.

Among autistic teenagers with autism, “there may be a subgroup that is at risk of developing hypomania,” he says, but “that’s all we can say.”