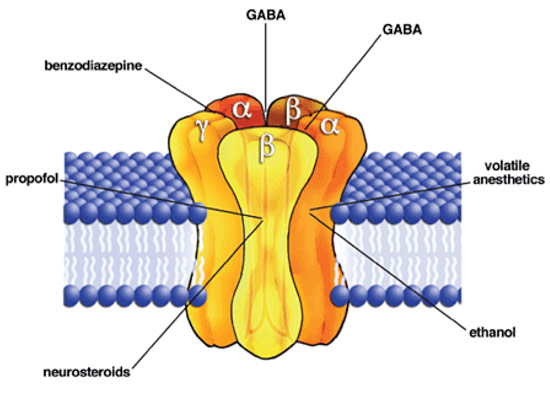 Uncommon culprit: A rare variant of the GABRB3 gene, which encodes a subunit of the GABA receptor, is associated with a six-fold increase in autism risk.

Scientists have for the first time found direct evidence that defects in a particular type of brain receptor sometimes give rise to autism, according to research published 24 November in Molecular Psychiatry1.

A few studies have shown that common variants of the GABRB3 gene, which encodes a protein that helps build GABA receptors, are more widespread among people with autism than among healthy controls3. But the new report is the first to find a rare, functional variant of GABRB3 in families with autism.

“There has been a tremendous amount of evidence linking this particular gene with autism, but it’s all considered somewhat circumstantial evidence,” says Timothy DeLorey, senior research scientist at the Molecular Research Institute in Palo Alto, California, who was not involved in the work. “This study shows a direct causal effect between this gene and autism.”

The research also gives some traction to the idea that autism, like epilepsy, is the result of an imbalance of excitation and inhibition in the brain.

“That’s a great concept for a biological substrate that could contribute to autism,” notes lead investigator Jim Sutcliffe, associate professor in the Center for Molecular Neuroscience at Vanderbilt University in Nashville, Tennessee. Sutcliffe points out that recent genetic studies linking autism to defects in excitatory signaling would also bolster this idea.

Still, the diversity of genetic variants found in people with autism indicates that disruptions of several different developmental pathways can lead to the disorder, Sutcliffe says.

GABRB3 is located in chromosomal region 15q11-13, which scientists first linked to autism in 19914. Maternally inherited duplications of this region are known to be autism’s most common genetic abnormality, accounting for between one and three percent of all cases of the disorder5.

Scientists have pegged four genes in the region as strong candidates for autism. Deleting the maternal copy of UBE3A causes Angelman syndrome, a developmental disorder marked by stunted language and cognitive development. Some people with autism also carry mutations in UBE3A6. The other three candidate genes encode pieces of GABAA receptors, membrane channels that are controlled by the ebb and flow of chloride ions.

GABAA receptors are composed of five protein subunits, which must be precisely assembled at the cell surface in order for the channel to work properly. GABRB3 encodes one of these subunits.

After scanning a large collection of families with autism, the researchers found this rare variant, which interrupts the coding of GABRB3. They calculated that people carrying the variant are six times more likely to develop autism than are controls.

In 1997, interested in studying the mechanics of GABA signaling, DeLorey and colleagues created a mouse model lacking both copies of GABRB37. Most of these mice die soon after birth. But to the scientists’ initial surprise, the animals that live exhibit behaviors reminiscent of autism.

“They have epilepsy, they’re hypersensitive to things like touch, they have stereotypical behavior, they have social impairments — it goes on and on,” says DeLorey.

His group has since made a mouse lacking just one copy of GABRB3, which he says is a better model of autism because people with the disorder are also likely to have only one defective copy of the gene. The study is unpublished, but DeLorey says this heterozygote model shows behaviors similar to those of the complete knockout, albeit to a milder degree.

About ten years ago, after finding common variants of GABRB3 in people with autism, a team led by Ed Cook went hunting for rare mutations in the gene. They identified the rare coding variant in 2 of 100 unrelated people with autism. In a subsequent search, they also found it in two unaffected fathers.

This was an intriguing finding because GABA receptor genes are known to turn on and off at different points during development. Defects in the gene suggest a plausible mechanism for autism because its symptoms first appear during early life. But with only two affected individuals identified, it wasn’t clear what role, if any, this particular variant would play in the disorder.

Cook deposited the data into the Single Nucleotide Polymorphism database, the publically available repository hosted by the National Institutes of Health. It sat there until last year, when a paper identifying the same variant in two children with epilepsy8 spurred Cook and Sutcliffe to look for it in a much larger sample of people with autism.

The fact that, among those with autism, the variant is inherited more often from the maternal chromosome suggests a role for epigenetic factors — chemical changes to DNA that have different effects on maternal and paternal chromosomes — in causing the disorder, Cook says.

“When the chromosome is coming from the mother, it’s basically turning on and off different genes than when it comes from the father,” says Cook, professor of psychiatry at the University of Illinois at Chicago. “How that happens is a fundamental biological question that would be amazing to figure out.”

The team also investigated how the variant alters cell function in vitro. They found that cells expressing the variant produce lower electrical currents. What’s more, the cells express significantly less of the GABRB3 subunit protein at the cell surface.

When taken with previous evidence, these results suggest that having the wrong combination of GABAA subunits at the cell surface during development — whether because of over-expression caused by a 15q11-13 duplication, or a loss of the protein caused by the rare variant — can lead to an autistic phenotype.

“My way of thinking about that is GABRB3 expression needs to be fine-tuned in relationship to activity and development,” says Cook. “If you increase or decrease the dose, you’re not in the sweet spot, in a sense.”

This is similar to the findings of other chromosomal regions, such as 16p11.2, where either a deletion or a duplication can lead to autism, he adds.

These kinds of functional experiments tell a more compelling story than do traditional genetic association studies, notes Susan Christian, research associate professor of human genetics at the University of Chicago, who was not involved in the work.

“This is becoming more and more important for papers — to not only show that you found a variant in a gene associated with autism, but to show that, yes, this particular mutation does change how this gene works.”