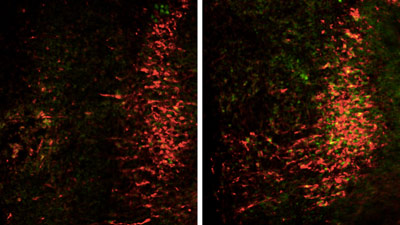 Infection detection: Brains of fetal mice whose mothers were exposed to an infection (right) show higher expression of a receptor for the neurotransmitter acetylcholine (red) than do those of controls (left).

A mother’s exposure to infection can exacerbate the effects of a genetic mutation and contribute to autism or schizophrenia in her pups, suggests an unpublished mouse study presented Wednesday at the 2013 Society for Neuroscience annual meeting in San Diego.

Pregnant women exposed to infections such as the flu have an increased risk of having a child with autism or schizophrenia. Paul Patterson’s team at the California Institute of Technology has long been interested in this phenomenon, and has studied it using a mouse model of this so-called maternal infection.

The researchers inject pregnant mice with a mock flu virus that triggers their immune response. The offspring of infected mothers have behaviors reminiscent of autism and schizophrenia, including anxiety, repetitive behaviors and social deficits.

The new study investigated how this environmental risk factor might interact with a genetic risk factor for neurodevelopmental disorders.

The researchers focused on mice lacking one copy of CHRNA7. This gene codes for the alpha7 nicotinic acetylcholine receptor, a protein that responds to the chemical messenger acetylcholine. The gene has been repeatedly linked to schizophrenia; rare mutations and duplications in CHRNA7 have also been reported in individuals with autism and intellectual disability.

Pups born to mice lacking one copy of CHRNA7 respond more dramatically to maternal infection than do those born to controls, the study found. They have more trouble unlearning a fear memory, for example, and are more anxious.

To better understand why, the researchers supplemented the diets of pregnant controls with choline — the precursor molecule for acetylcholine — before and after they received the mock-flu injection. (The mice receive choline beginning 3 days after conception and the mock virus on day 12.)

This suggests that the cholinergic system is an important driver in the effects of maternal infection, says Wei-Li Wu, a postdoctoral fellow in Patterson’s lab who presented the work.

The researchers also looked closely at fetal brains three hours after the mother had received the mock-flu injection. Maternal infection boosts the expression of CHRNA7 in fetal brains and increases levels of interleukin-6 (IL-6), a signaling molecule in the immune system. Dietary choline prevents these changes, too.

Putting this all together, the researchers hypothesize that in response to the flu, the mother’s immune system triggers an increase in IL-6. And IL-6, in turn, somehow increases the expression of CHRNA7 in the fetal brain, leading to abnormal acetylcholine signaling.