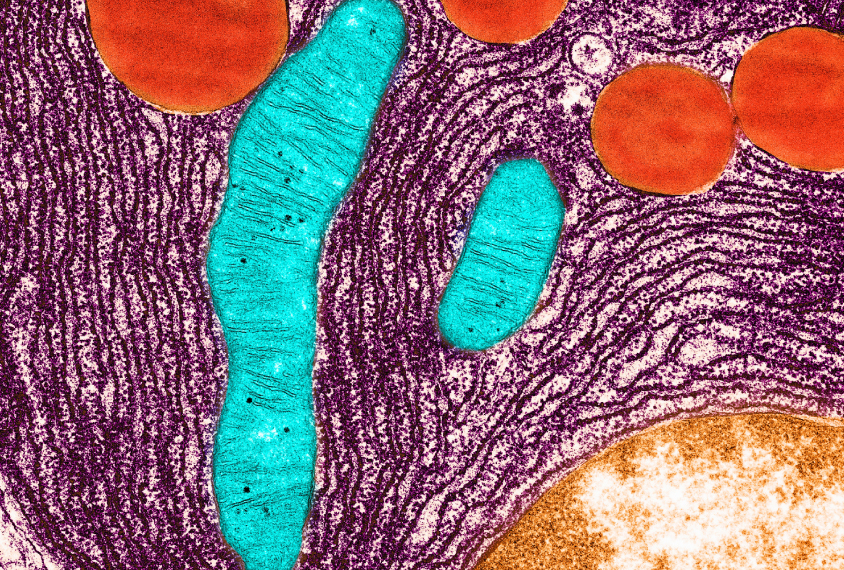 Low charge: Mutations that alter how mitochondria power cells could contribute to autism.

Mice with a mutation in their mitochondrial DNA show altered brain activity, repetitive behaviors and reduced sociability, according to a new study.

The work is the first to demonstrate that changes to mitochondrial DNA alone can cause autism-like traits in mice.

“This is very groundbreaking,” says Elizabeth Jonas, professor of internal medicine and neuroscience at Yale University, who was not involved in the work but has studied mitochondrial function in fragile X syndrome.

Mitochondrial DNA contains 37 genes that code for the proteins needed to power cellular functions. Autistic people tend to have more mutations in this DNA — and more conditions associated with such mutations — than non-autistic people do, previous research has shown.

A cell’s nuclear DNA contains thousands of genes — some of which are associated with autism — that also affect how mitochondria produce energy. But because those genes can have other roles, how they shape the link between energy production and autism has been unclear.

The new study confirms that mitochondrial energy production is linked to autism-like traits, and raises the possibility that mutations in known autism-associated genes influence the condition at least in part by affecting how energy is created and used, says lead investigator Douglas Wallace, director of the Center for Mitochondrial and Epigenomic Medicine at the Children’s Hospital of Philadelphia in Pennsylvania.

Because the brain uses so much of the body’s energy — around 20 percent — any changes in how mitochondria produce that energy could affect the brain’s function, he says. “This is a paradigm change in how we look at the mechanism that causes autism.”

The researchers tested a mouse they’d previously created that has a mutation to one DNA ‘letter’ in the mitochondrial gene ND6. This gene codes for a protein required to make adenosine triphosphate, the main source of energy in living cells. People with ND6 mutations often have seizures, intellectual disability and low muscle tone, and some have Leigh syndrome, an often fatal neurological disorder.

The ND6 mice showed less interest when presented with a new mouse than control mice did. They buried more marbles in their bedding, a trait reminiscent of repetitive behaviors in people. And they showed signs of anxiety — freezing in an open area more often and for longer periods than controls did, for example. The ND6 mice did not have spontaneous seizures but reacted to lower concentrations of a seizure-inducing drug than control mice did.

The cortex and hippocampus in the ND6 mice were also less active, according to electroencephalography (EEG) recordings, with the cortex showing the greatest differences from control mice. Mitochondria in the ND6 mice’s cortex — but not in the hippocampus or olfactory bulb — were less efficient than controls’ at converting oxygen and nutrients into energy. The findings were published in the Proceedings of the National Academy of Sciences earlier this month.

The ND6 mice show the same number of inhibitory neurons in their hippocampus as the controls, the researchers also found — which is “super important,” Jonas says. Some autistic people have an imbalance between excitatory and inhibitory brain activity, and it’s possible that inhibitory neurons — which have higher energy needs — are more sensitive to mitochondrial changes than their excitatory counterparts are.

Testing the electrical activity of the mice’s inhibitory neurons would have been “really exciting,” Jonas says. Wallace’s team plans to begin this work in brain slices shortly.

If energy production problems play a significant role in autism, mitochondria could be a target for treatment, Wallace says.

How the findings in mice translate to autism in people, however, is unclear, says Frank Castora, professor of physiological sciences at Eastern Virginia Medical School in Norfolk, who was not involved in the work. The findings, although “very significant,” do not necessarily mean that the mutation in the mice contributes to autism in people, he says.

Still, the work may spur others to look more closely at the role of mitochondrial dysfunction in autism and other conditions, such as Alzheimer’s disease, Castora says.

“Anytime you can demonstrate something that will excite the rest of the scientific community and convince them that this is an area that needs to be looked at much more closely, I think that’s a good thing, and I think that’s what this paper does,” he says.