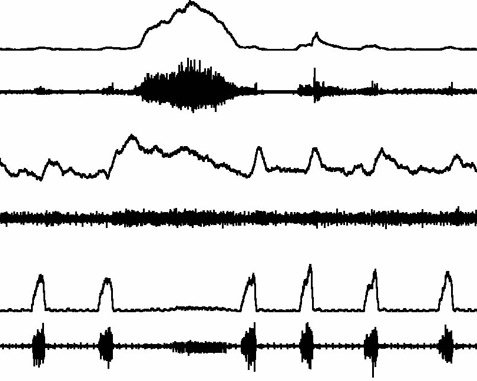 Bated breath: Irregular breathing patterns in children with Rett syndrome are caused by too much action in neurons that control exhalation.

A controversial new approach that quiets the activity of certain neurons in the brain alleviates breathing difficulties in a mouse model of Rett syndrome, according to a study published 4 October in the Proceedings of the National Academy of Sciences1.

Besides loss of speech and motor skills, children with Rett syndrome often have irregular breathing: they often hold their breath, hyperventilate or swallow air2.

In 2005, researchers isolated the brainstems of mice lacking MeCP2 — mutations in which cause Rett — and showed that some neurons don’t ‘fire,’ or send signals to connecting neurons, properly. They also found that the brain area is deficient in norepinephrine, a chemical messenger that transmits excitatory impulses between neurons3.

Mouse studies published since then have suggested that boosting levels of norepinephrine may help cut down the number of episodes of breath-holding, or apnea4,5. A pilot study is under way in France to test desipramine — a drug that effectively ups norepinephrine by preventing its removal from the gaps between cells — in girls with Rett.

But the new study suggests that the opposite approach — calming nerve activity in areas of the brainstem that control breathing — might also be effective.

This strategy has raised some eyebrows among researchers in the field.

“Certainly in presentations and at meetings this [approach] has not been 100 percent accepted,” notes lead investigator John Bissonnette, professor of cell and developmental biology at Oregon Health & Science University. “The general thought is when you stop breathing, you need to stimulate things, not quiet them down.

Bissonnette and his colleagues stumbled across this approach when they measured the activity of respiratory nerves taken from the brainstems of mice deficient in MeCP2. Nerves that control the exhalation phase of breathing are overactive in the mutants compared with controls, they found.

That finding was not entirely surprising because a 2008 study had shown that male mice lacking MeCP2 don’t have sufficient quantities of the brain’s main inhibitory neurotransmitter, gamma-aminobutyric acid, or GABA6. The lack of GABA could cause neurons in the area to be overactive, Bissonette says.

In the new study, his team showed that injections of a GABA enhancer — which is known to quiet neurons that control exhalation — cut the number of breath-holding episodes in mutant mice by about 80 percent.

Similarly, giving an activator of the serotonin 1a receptor, which controls inhibitory signaling, lowers the number of apneas in mutants.

The researchers plan to administer the drugs in discrete areas within the brainstem to learn more about the drug’s mechanism of action.

“The approach has the great benefit that the drugs are currently available for clinical use,” notes James Leiter, professor of physiology and medicine at Dartmouth Medical School in Hanover, New Hampshire.

In the meantime, Bissonnette’s group plans to cross MeCP2-deficient mice with mutants whose GABA neurons have been tagged with a fluorescent protein marker. The technique may help the team identify structural defects in neurons that control exhalation, Bissonnette says.

Others are also trying ways to block either too much excitation or too little inhibition of neurons as a treatment for Rett syndrome.

For example, drugs that block glutamate, an excitatory neurotransmitter, are becoming more popular for treating a variety of conditions, Leiter says.

GABA and glutamate are prevalent throughout the brain, so, “in both cases, the magnitude of the side effects will determine the clinical utility of these drugs,” Leiter says.

Leiter’s own team is using ‘deep-brain stimulation,’ a technique for sending electrical impulses to the brain, in a mouse model of Rett. The method may work by dampening excess excitability in the brain, he says.

GABA-enhancing drugs are used to treat seizures in people with Rett syndrome, but the drugs cause extreme drowsiness. One of the drugs used in the new study targets a specific type of GABA receptor and does not have the same sedative properties, notes James Eubanks, associate professor of surgery at the University of Toronto, who was not involved with the work.

It may be that quieting and stimulating neurons can each help treat respiratory difficulties in Rett, Eubanks says.

“What I find exciting about this is that it suggests there’s more than one way to overcome the deficiencies that are seen in this particular system,” says Eubanks. “It’s nice when you have two different ways to treat something that are seemingly independent of one another.”