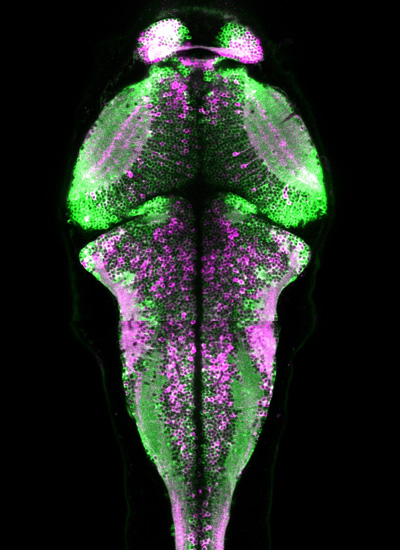 Calcium fishing:  Zebrafish larvae expressing CaMPARI show different patterns of red and green fluorescence depending on the stimuli they are exposed to.

Researchers have engineered a fluorescent sensor that irreversibly switches from green to red when a neuron fires, thereby serving as a permanent mark of neuronal activation. They described the unpublished work Monday at the 2014 Society for Neuroscience annual meeting in Washington, D.C.

The sensor enables researchers to see which neurons become active in response to specific stimuli or during certain behaviors, without having to monitor fluorescence in the brain in real time. It may be useful for studying brain circuits in animal models of autism.

To detect changes in neuronal activity in cells or animals, neuroscientists traditionally use fluorescent proteins that are sensitive to changes in calcium levels. When a neuron fires, causing calcium ions to rush into the cell, these proteins light up.

Researchers must observe these changes in fluorescence as they occur, which limits the area that can be analyzed to what can be seen through the microscope at a given point in time. It also means that in order to look at brain activity in a living animal, scientists have to restrain the animal — preventing it from engaging in certain behaviors.

To overcome these limitations, the researchers created a calcium-sensitive form of the fluorescent protein EOS2, which permanently switches from green to red when illuminated by violet light. “Only in the presence of high calcium do you get efficient conversion to red when you shine the light,” says Eric Schreiter, a senior scientist in Loren Looger’s lab at the Howard Hughes Medical Institute’s Janelia Farm Research Campus in Virginia, who presented the work.

First, they engineered rat neurons grown in culture to express CaMPARI. They found that the more the neurons fire, the redder they become.

They then tested CaMPARI in fruit fly larvae engineered to express the probe in a subset of peripheral sensory neurons. They turned on the violet light and vibrated the dish containing the larvae. So-called chordotonal neurons, which are known to be sensitive to vibrations, turned red, whereas other types of sensory neurons remained green. Stronger vibrations induced more color change.

The researchers also tested the probe in zebrafish larvae. They illuminated the fish as they swam in a dish, and saw neurons involved in motor activity light up in red. Various stimuli, such as changing the temperature of the water or adding a drug that induces seizures, changed the pattern of neurons that turned red.

Next, the researchers tested CaMPARI in the visual cortex of mice shown a video of moving gratings — alternating white and black parallel lines aligned at a 45-degree angle. They found that the green-to-red switch occurs in only a subset of cells sensitive to lines oriented in this direction, and not in cells that respond to gratings oriented horizontally or vertically. “It seems like this is a selective marker of cells that are active,” Schreiter says.

The mice were restrained for this particular task, but Schreiter says he can envision using a wireless illumination system in the future.

Slices of brain tissue from the mice showed the same patterns of fluorescence as in the living animals. That indicates that the probe remained viable throughout the preparation of brain slices. It also means researchers may be able to image brain activity patterns over a much larger field of view than is possible in living animals.

In their final test of the probe, the researchers looked at adult fruit flies that produce CaMPARI in their neurons. They delivered puffs of various odors to the flies’ antennae, and observed selective activation of neurons known to be responsive to each odor.

They then engineered these so-called ‘olfactory neurons’ to be activated by red light, to trigger stronger activation of olfactory circuits. They observed red fluorescence not only in olfactory neurons in the brain, but also in neuronal fibers traveling through the neck region of the flies. “This is preliminary evidence suggesting that we can mark downstream components of the olfactory circuit,” Schreiter says.

The work is as yet unpublished, but Schreiter says he plans to treat his lab to a round of the popular crimson-colored liqueur that shares its name with CaMPARI as soon as the study is accepted for publication.