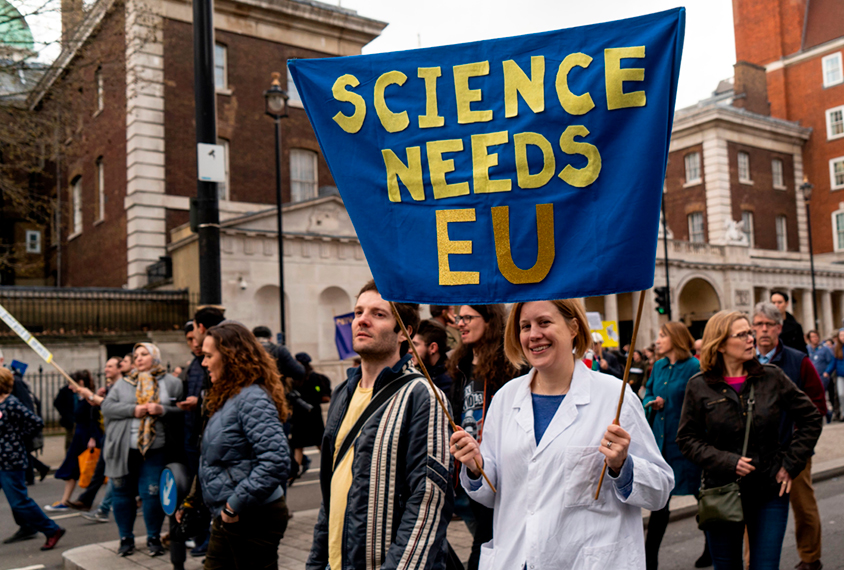 Friendly neighbors: Scientists in the United Kingdom rely on the European Union for personnel, equipment and data sharing.

Autism researchers in the United Kingdom are growing anxious about Brexit — the nation’s planned exit from the European Union. In particular, they say, Brexit will make it harder to carry out the large international studies that the field increasingly relies upon.

“We had 30 years of people doing small-scale studies,” says Emily Jones, professor at Birkbeck, University of London. The only way to get a handle on autism’s heterogeneity, she says, is through studies that rely on thousands of participants. Being part of the E.U. has facilitated those large-scale efforts.

But as Brexit looms, the future of these big studies looks uncertain.

The U.K. voted to leave the E.U. in a 2016 referendum and began the formal departure process later that year. However, the U.K. Parliament has repeatedly vetoed deals outlining the terms of the exit and plans to hold a general election on 12 December to resolve the deadlock.

Three years of uncertainty have already hurt U.K. science, according to the Royal Society: The U.K.’s share of E.U. research funding has fallen by 28 percent since 2015, and 35 percent fewer scientists have come to the U.K. through the E.U.’s prestigious Marie Skłodowska-Curie Fellowships.

If and when the U.K. leaves the union, scientists say, they expect to see a raft of negative consequences, including for autism research.

The U.K. government has promised to replace lost E.U. funding — including from the Horizon 2020 program, a major funding source for autism research — from its own coffers.

Many scientists are skeptical, however. If Brexit hurts the U.K. economy as predicted, research funding will inevitably be cut, they say. “I don’t believe necessarily the promises that were made,” says Teodora Gliga, senior lecturer in psychology at the University of East Anglia in Norwich.

Gliga and others say they are particularly worried about Brexit’s effect on their participation in Europe-wide collaborations.

For instance, the EU-AIMS project, which ran from 2012 to 2018, harnessed data from thousands of people across 37 European countries. The project aimed to identify treatment targets for autism and reveal why some therapies are effective in subgroups of autistic people. “We were trying to find different subgroups to parse this heterogeneity,” says Eva Loth, senior lecturer in psychology at King’s College London.

A follow-up project, AIMS-2-TRIALS, launched last year, plans to facilitate large-scale clinical trials by building a network of sites across Europe. And another large project, Eurosibs, studies ‘baby sibs’ — infants who have an older sibling with autism and are at increased odds of having the condition. The project has 13 sites in seven countries, including the U.K.

These projects will probably survive, but U.K. researchers may not be able to join similar new collaborations.

Data sharing is likely to be a big challenge for such collaborations post-Brexit too, says Jones, who leads Eurosibs.

“A lot of what we have to do is transfer clinically sensitive data across countries,” she says. For now, this is governed by a shared set of regulations across the E.U. After Brexit, these regulations may no longer apply to the U.K. — and there may not be a new data-sharing agreement for years.

“Potentially, there’s going to be a phase where it’s almost impossible to transfer personal data — not necessarily because it’s illegal but because everyone gets nervous when there aren’t frameworks,” Jones says.

A more immediate problem will be recruiting scientists from other countries, says David Simmons, lecturer in psychology at the University of Glasgow in Scotland. Brexit is likely to restrict freedom of movement between the E.U. and the U.K., making it harder for E.U. citizens to settle in the U.K. And E.U.-based scientists are already reluctant to come to the U.K. as Brexit looms, he adds: “Rather than risk doing their master’s courses in the U.K., they’re going to the Netherlands or Belgium or Germany instead.”

Depending on the terms of the deal, Brexit could also make it difficult to move scientific equipment between the U.K. and the E.U. because of new customs checks at the border.

Gliga is trying to obtain an electroencephalography machine from Germany to study sleep in infants with high odds of autism. “[Suppliers] are really worried that things will slow down after [Brexit], so we have to rush,” she says.

Shipping equipment between E.U. and non-E.U. countries is often harder and more time-consuming, Jones says. When her group sends equipment to South Africa, someone has to fly with it and guide it through customs. On one occasion, customs officers queried the paperwork, and the equipment was impounded for a week. “If you’ve got customs checks, these things happen,” she says. “It just makes it much more difficult to operate smoothly.”

None of the researchers Spectrum spoke to said Brexit offers any benefits to autism research — only barriers.

“The more barriers, the more challenging it is for people to move and for information to move,” Jones says. “Basically, [Brexit] is putting up massive walls to information flows.”