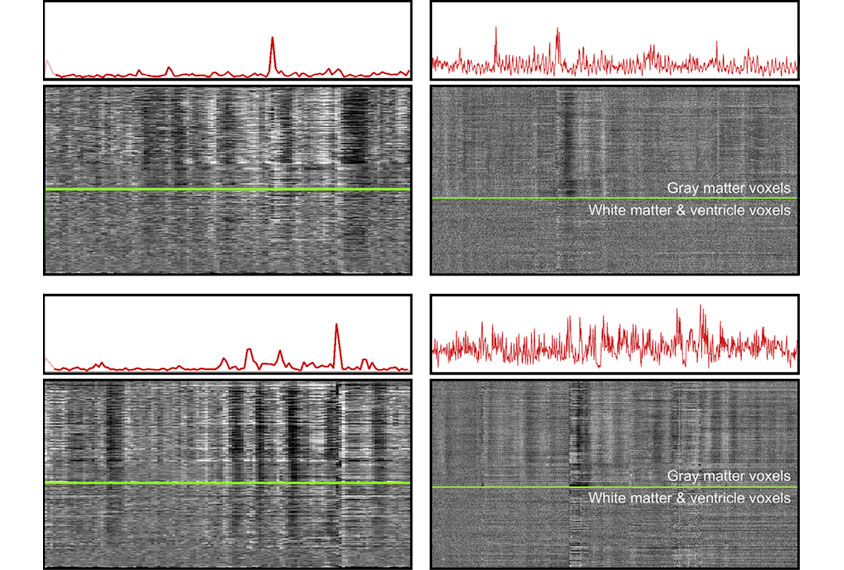 Motion sickness: Movements that disrupt a brain scan are more pronounced in new technology (right) than in older ones (left).

Autism researchers who use brain scans are not accounting for the head motion caused by study participants’ breathing, according to new research1,2.

As a result, studies that look at brain activity in autistic people may be drawing incorrect conclusions.

“Respiration and motion may not be the variables of interest for an [imaging] study, but they are essential for interpreting and deriving meaning out of the data,” says lead investigator Rebecca Jones, assistant professor of neuroscience in psychiatry at Weill Cornell Medicine in New York City. “We need to be much more cognizant of these factors when we look at our data.”

The effect of breathing is especially problematic for studying autism, the researchers say: Not only do children with autism tend to fidget in the scanner more than their neurotypical peers, but they may also have different rates and patterns of breathing.

Researchers typically use functional magnetic resonance imaging (fMRI) to capture and align consecutive brain scans and create a picture of brain activity over time. Scientists have been aware for almost a decade that head movements inside the scanner can make images blurry, and they have developed ways to correct for these artifacts — among them, simply discarding the bad images.

But today’s faster brain-scanning technology captures consecutive images once every 700 to 1,000 milliseconds, compared with once every 2 to 4 seconds a decade ago. This more frequent sampling can pick up rhythmic movement caused by breathing that was previously invisible. Conversely, bigger and more spaced-out motions, such as deep breaths, are now more difficult to detect because they are distributed as smaller doses of noise across multiple images.

In one of the two new studies, Jones and her colleagues defined five distinct types of motion artifacts caused by breathing, each of which affects scans in a specific way. In the second, they showed that some widely used approaches for detecting and accounting for motion in brain scans don’t consistently identify them. The papers were published over the past two months in NeuroImage.

“Their careful work [shows] that the real picture is more complicated than most researchers realize,” says Mike Tyszka, associate director of the Caltech Brain Imaging Center in Pasadena, California, who was not involved in the research.

The researchers then analyzed scans from the Human Connectome Project, a public dataset that aims to characterize typical brain activity. They assessed 900 scans, selecting 440 that are accompanied by reliable breathing and heart-rate data.

They found that regular constant breathing and occasional deep breaths both cause head movements that appear in the scans. The two together cause another disturbance in the scans that the researchers say they do not yet fully understand.

Both types of breaths also cause artifacts the researchers call ‘pseudomotion,’ which occurs even when the head does not move. That’s because every breath moves the body, pushing the stomach down and expanding the chest.

“You’re actually moving a lot of tissue,” says Jonathan Power, a psychiatry resident at Weill Cornell Medicine who worked on the study. “That creates instabilities in the magnetic field of the scanner.” Breathing can interact with the magnetic field and make it appear as if the head is moving from side to side or front to back, depending on the scanner’s settings.

“A lot of the really big motion is actually happening when people take big sighs, which is a really common thing,” Power says.

The team found that twins tend to have similar patterns of artifacts, indicating that movement caused by breathing is heritable. They also found that both motion and pseudomotion are stronger among people with a high body mass.

Scientists usually track breathing in the scanner by having the people being scanned wear a belt around their abdomen and measuring the belt’s tension. They then align each person’s breathing pattern to the scan and use one of several algorithms to correct for the data or discard it.

But the belts can slip, and they register not just breathing-related movement but any movement at all. “That creates tons of headaches” for researchers trying to account for breathing, Power says.

In the second study, the team again analyzed breathing data from the 440 brain scans and applied three different algorithms that are widely used to account for breathing motion.

They found that breathing is extremely variable from person to person. All three measures they tested missed deep breaths in the scans, and one did a particularly poor job.

These studies help build a clearer picture of how breathing creates noise in brain scans, says Tonya White, associate professor of child and adolescent psychiatry at Erasmus University in Rotterdam, the Netherlands, who was not involved in the studies.

Power says researchers should take their findings into account and collect reliable breathing data to adjust their scans. He and his colleagues are recording breathing patterns in the scanner and building algorithms that can better account for them.