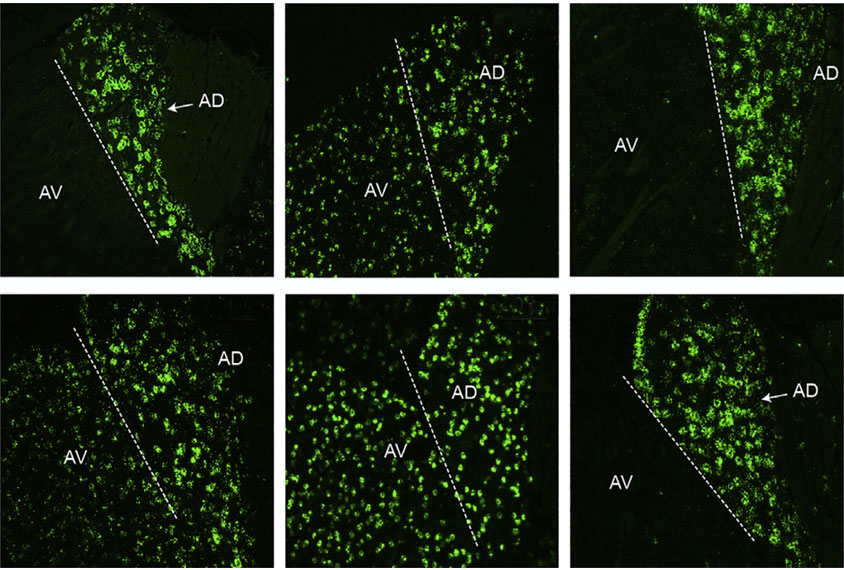 Short circuit: Several genes linked to autism (top) and schizophrenia (bottom) are highly expressed in the thalamus in mice and, when mutated, seem to lead to memory problems.

Silencing several autism- or schizophrenia-linked genes in the thalami of mice increases neuronal excitability there and leads to memory problems reminiscent of those seen in people with these conditions, a new study shows. A drug that reverses the hyperexcitability boosts the animals’ recall, suggesting an avenue for future therapies, researchers say.

“It’s exciting to see how different genetic changes can converge onto the same circuits in the brain, and even onto the same physiological mechanism,” says Audrey Brumback, assistant professor of neurology and pediatrics at the University of Texas at Austin, who was not involved in the research. “We’re really then getting toward the final common pathway that could be a target for treatment.”

Mice lacking the high-confidence autism-linked gene PTCHD1 in the thalamic reticular nucleus, a subregion of the thalamus, are hyperactive and have attention deficits, according to a 2015 study. In the new work, the same team eliminated PTCHD1 expression and the expression of four other genes linked to either autism or schizophrenia in a different subregion, the anterodorsal thalamus.

“It is now very clear that for every phenotype or symptom that you have, there’s a particular circuit responsible,” says lead investigator Guoping Feng, Poitras Professor of Neuroscience at the Massachusetts Institute of Technology in Cambridge. The work was published in June in Neuron.

Scientists have long deemed the thalamus responsible for processing sensory information and relaying it to the cerebral cortex. Feng’s previous work on PTCHD1 suggested that the thalamus could also have a role in cognition.

Analyzing an existing map of gene expression in the mouse brain, Feng and his colleagues noticed that PTCHD1 and four other autism-linked genes, along with three schizophrenia risk genes, are highly expressed in the anterodorsal thalamus. They used CRISPR to block the expression of each of the eight genes, one by one, in only that region.

Typical mice tend to freeze when they are placed in a chamber in which they previously received a mild foot shock — a reaction that shows they formed a long-term memory. Mice lacking PTCHD1, the autism-linked gene YWHAG or any of three schizophrenia genes had trouble making this association, however. When placed in a T-maze, these five mouse models also struggled to recall a prompt they had been trained to recognize, telling them where to go.

Brain slices from the mice missing PTCHD1, YWHAG and one of the schizophrenia genes, HERC1, also contained more excitable neurons than those of controls, the researchers found.

The researchers eliminated this hyperexcitability using a technique called chemogenetics, which involved genetically engineering neurons in the anterodorsal thalamus to produce designer receptors for a special drug. After treatment with the drug, the three knockdown mice no longer showed either type of memory problem.

Feng’s team separately inhibited neurons in a neighboring subregion of the thalamus, the anteroventral thalamus, and found that the animals’ long-term and working memories remained intact. However, these mice confused a new box with one that they had been placed in before, suggesting the subregion is involved with memory specificity.

“You can imagine that there are people who have problems with one of those [types of memory] but not the other,” Brumback says. “And the more specific we can get in treating the circuits that do the things they’re having trouble with, and not all the other stuff, the better our treatments are going to be.”

The team says that the next step is developing a drug that targets existing receptors, not designer ones, only in the anterodorsal thalamus. This is an important goal because current therapies drug the entire brain, causing side effects, says Sam Wang, professor of neuroscience at Princeton University, who was not involved in the new work. “One promise of this kind of anatomically specific work like they’ve done is to start thinking about directing therapies at specific brain regions to gain more precision.”

Researchers also need to find out if the results in adult mice translate to people with genetic mutations, who experience brain differences over the course of development, Wang says. And because other brain regions express the genes in the study, researchers will need to explore whether those regions might also affect behavior or influence the anterodorsal thalamus.

“It’s the tip of the iceberg,” Wang says.