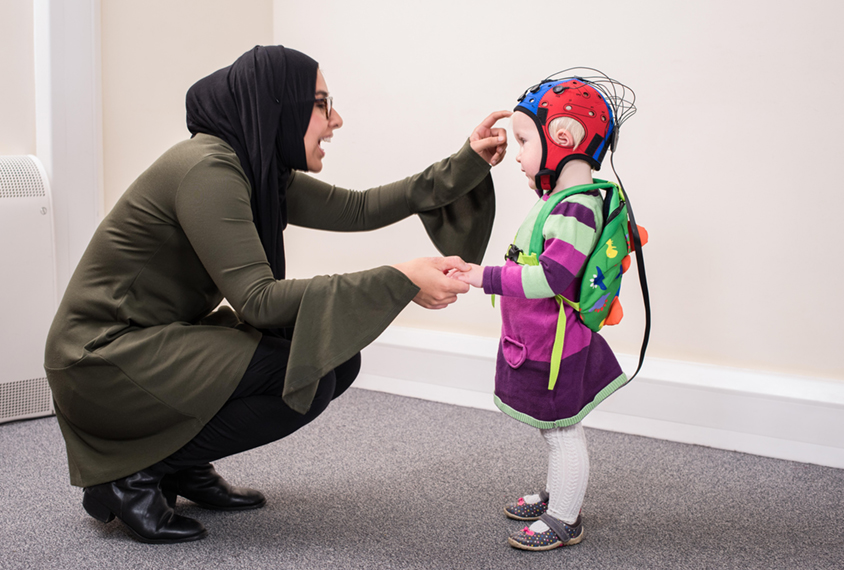 This story appeared 6 May 2021 as a conference report from the International Society for Autism Research annual meeting. The results have since been published in Science Translational Medicine.

A delayed brain response to viewing faces may predict social-skill development lags in autistic people, according to new findings, suggesting the response could be used as a biomarker for autism.

Researchers presented the findings virtually in May 2021 at the International Society for Autism Research annual meeting. (Links to abstracts may work only for registered conference attendees.)

“Autistic people tell us they don’t want us to be changing their personality or how they experience their autism, but there might be more specific things they want help with,” Jones says. “One of the reasons we’re interested in stratification markers is to find markers of those things autistic people want support or treatment for.”

One such biomarker might be a brain response called the ‘N170 event-related potential,’ a spike in electrical activity that occurs about 170 milliseconds after a person views a face. This response is often delayed in autistic people compared with non-autistic people. The finding is one reason the U.S. Food and Drug Administration is considering the use of the N170 as a biomarker in clinical trials.

Delays in the N170 response could help identify which children would benefit from more help in developing social skills — such as playing in groups — that are important for quality of life, Jones says.

“We’re finding consistent evidence that at least there is something in looking at these traditional social brain measures,” Jones says.

Jones’ team used electroencephalography to measure the N170 response in 246 autistic and 190 non-autistic people aged 6 to 31 while they looked at pictures of faces. The researchers also imaged the participants’ brains during the task using functional magnetic resonance imaging and had participants’ parents fill out a survey assessing everyday social skills. The participants, who are part of the Longitudinal European Autism Project, repeated the tests one to two years later and also contributed genetic data.

On average, autistic people had more delayed N170 responses than non-autistic people. Regardless of group, people who had more autism-linked genetic variants had slower N170 responses, and people with slower responses had less activity in the fusiform gyrus, a part of the brain involved in social processing.

The work is a first step toward translating research findings into useful clinical measures, Jones says. Researchers need to replicate the findings in larger groups and establish guidelines for when a biomarker could be implemented.

“We worked out a path to ask these questions,” Jones says. “If we wait forever for the perfect signal, then we’re not doing people any good either.”