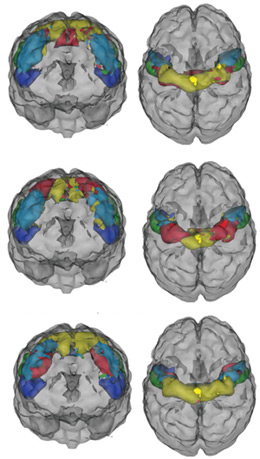 The motor cortex of children with autism is wired differently than that of typically developing children, reports a study published 22 October in Human Brain Mapping1.

Difficulties with motor control and learning crop up in as much as 80 percent of children with autism, although they are not considered one of the core symptoms of the disorder. Motor problems are thought to be among the earliest identifiable behavioral signs of the disorder, prompting researchers to pay them increasing attention.

So far, little is known about the underlying neurobiology of autism-related motor problems, says lead investigator Stewart Mostofsky, director of neurocognitive and imaging research at the Kennedy Krieger Institute in Baltimore. In 2009, his group reported that children with autism have less activity in the cerebellum, a brain region essential for movement, than controls do.

In the new study, he and his colleagues set out to examine connectivity in the primary motor cortex. This strip of cortical real estate, called M1, integrates motor information from other brain areas and sends movement commands down the spine to the muscles.

Using functional magnetic resonance imaging (fMRI), the researchers measured so-called resting-state activation — during which the subject is lying passively in the scanner — and looked for areas within M1 that tend to activate and deactivate together.

This allows researchers to piece together a functional map of regions dedicated to specific tasks and determine how they connect to each other.  Ultimately, researchers say, they hope the approach will allow them to link an individual’s M1 activity pattern to his or her movement difficulties.

“This offers us a very good starting point for examining the relationship between brain and behavior,” says Marlene Behrmann, professor of psychology at Carnegie Mellon University in Pittsburgh, who was not involved in the research.

Because this technique had never been used to map functional connectivity in the motor cortex, the researchers first analyzed imaging data from 20 healthy adults. They applied mathematical models to delineate five functional subsections of the region, defining the normal connectivity pattern in M1.

They then scanned 32 children with high-functioning autism or Asperger syndrome, aged 8 to 12 years, and compared them with 33 controls matched by age, gender and handedness. To control for artifacts introduced by head motion in the scanner, they excluded data from any child whose head shifted more than three millimeters during the scan.

Among adults and controls who were 11 or 12 years old, trunk and leg movements are represented in one subregion of M1 and arm movements in another distinct, neighboring subregion.

Among controls who were 8 or 9 years old, and all children in the autism group, however, these two regions appear to be combined, and movements of arms, trunk and legs are spread throughout this expanded cortical space.

This suggests that functional connections in the motor cortex maturelater in children with autism than in controls, says Mostofsky.

To test this theory, the researchers plan to scan children of different ages who have autism, and follow the same set of children over several years, Mostofsky says.

What they find may provide guidance for therapy, he adds. Studies suggest that mastering motor skills is important for correctly interpreting movements and gestures made by others, and for mastering social communication.

If a child is struggling with social skills because he is unable to learn certain movements, therapists will need to find a workaround for teaching those skills, Mostofsky notes. “But if it’s a question of delayed maturation, there may be a better [time] window to try to teach social gestures.”

The researchers haven’t yet looked at how the connectivity data relate to the children’s motor skills. That makes it difficult to understand exactly what the differences mean, says Emma Gowen, lecturer in the faculty of life sciences at the University of Manchester in the U.K., who was not involved in the study.

Before that’s possible, researchers need to overcome a technical hurdle.

Still, the study hints at possible explanations for some behavioral observations, Mostofsky says.

His group’s previous research found that children with autism have difficulty visually gauging the position of their bodies when learning a motor task. Instead of using this visual feedback to guide their movements, they rely more on proprioception, the ability to sense the body’s position in space2.

The diffusion of arm movements in these children into the same region that controls leg movements may be associated with this learning difference. “Upper limb control is much more reliant on visual feedback,” he says. “We use our legs to propel our body, but we use our arms to interact with the world around us and to grab and manipulate objects.”

Gowen says the difference in M1 maps in children with autism might also explain why individuals with autism vary in how they make the same movement. If M1 is poorly differentiated, connectivity in the region might be less precise, disrupting the predictability of movements.

Gowen adds that the mapping technique Mostofsky’s team used could also be applied to other areas of the brain, such as the primary sensory cortex and the visual cortex. “Maybe this could help understand the sensory as well as the motor issues [in autism],” she says.