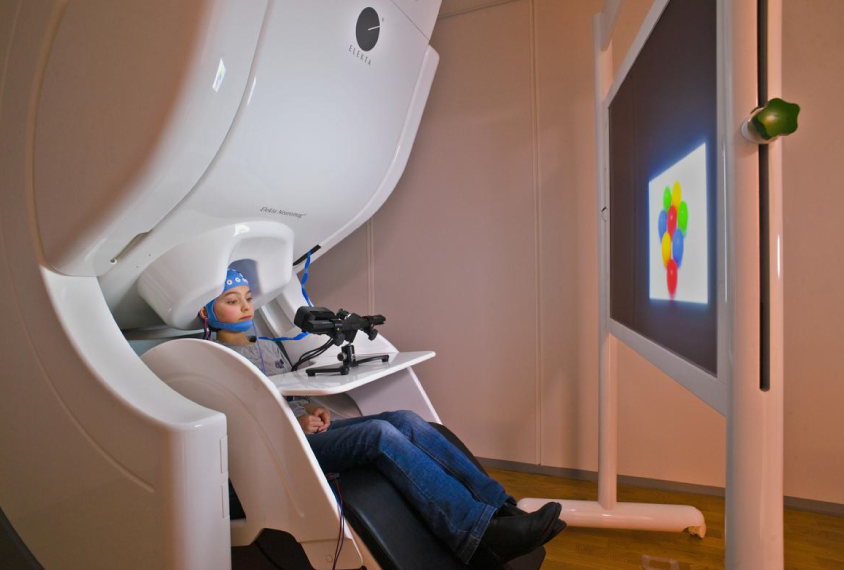 Several of the brain’s responses to sound are sluggish in autistic children who speak few or no words.

These delays could derail language development; they may also serve as a biomarker to help clinicians identify children in need of speech and language therapies, says lead investigator Tim Roberts, professor of radiology at the Children’s Hospital of Philadelphia.

Roberts presented the unpublished results in three posters today at the 2019 International Society for Autism Research meeting in Montreal.

Roberts and his colleagues first reported that autistic people show delays in processing sound more than a decade ago. The team made the discovery using a technique called magnetoencepahlography (MEG), which detects the magnetic fields generated by the brain’s electrical activity.

Another brain response, called the mismatch field latency (MMF) — which peaks in response to unexpected speech sounds (such as an ‘ou’ after a series of several ‘ah’s) — is also delayed, by about 50 milliseconds, in autistic children.

The new work is the first to check for these delays among autistic children who are minimally verbal. Many such children also have cognitive impairments and can be difficult to study.

The minimally verbal group’s M50 response lags behind that of the control group by about 13 milliseconds, and their M100 response by about 40 milliseconds, the researchers found. Similar delays exist among children with intellectual disability.

This finding suggests that the delay is driven by cognitive problems.

“This might be reflecting an inability of information processing,” Roberts says. “It’s showing up in language ability, but it’s actually just a global dysfunction.”

“If you can’t process sounds fast, if you can’t track the fact that the syllables have changed — it’s going to make you lousy at conversation,” Roberts says.

Roberts and his colleagues also measured a brain response called event-related desynchronization, which is a spike in brain waves that occurs when a person hears a word. An unpublished study previously suggested that stronger responses track with better scores on a test of language abilities.

The next step, Roberts says, is to test these same brain responses in infants and toddlers who have genetic mutations that put them at increased risk for autism or intellectual disability. He says the responses might give doctors an indication of how the child’s language and cognition might develop.