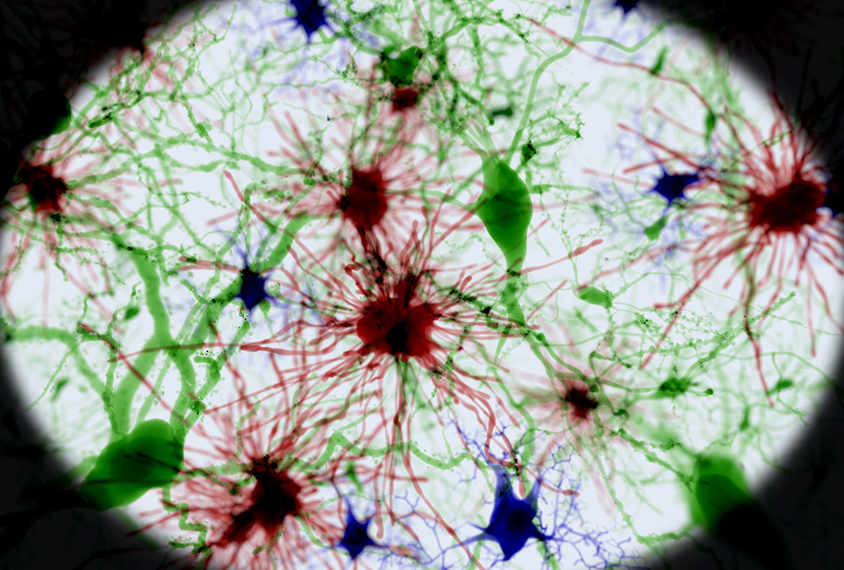 A pregnant mouse’s response to infection alters the immune cells in her pups’ brains. These immune cells, or microglia, shape neuronal connections, and they may contribute to autism-like behaviors in the pups.

A drug that kills the altered microglia, allowing new ones to grow, eases the pups’ social deficits and repetitive behaviors.

Researchers presented the unpublished findings in two posters at the 2018 Society for Neuroscience annual meeting in San Diego, California.

Microglia prune synapses, the connections between neurons, during infancy and early childhood. They can also trigger synapse formation and the growth of dendritic spines, the signal-receiving ends of neurons1.

The cells have been found to be hyperactive in the brains of young men with autism. And studies of postmortem brains show that the expression of genes related to inflammation and microglia is altered in autism.

Because microglia are the brain’s first response to infection, the researchers theorized that the cells might also be involved in the link between maternal infection and autism.

They injected pregnant mice with a compound that mimics a viral infection. The pups lack the usual preference for interacting with other mice and show repetitive behaviors reminiscent of autism.

The researchers analyzed neurons and microglia in brain slices from the pups at 60 days of age. They found that neurons in the prefrontal cortex, a brain region implicated in autism, have a greater proportion of thin and immature spines than those in controls.

Microglia in the pups also have more branches than those in controls and interact more frequently with dendritic spines, the researchers found. The microglia also produce more of the growth factors that stimulate neurons to produce dendritic spines.

“Their physiological function, making and supporting synapses, might be altered in an aggressive manner,” says Seiko Ikezu, research assistant professor in Tsuneya Ikezu’s lab at Boston University, who presented the findings.

The team then gave the pups an experimental drug called PLX5622 from age 21 to 42 days. This drug blocks a receptor required for microglia’s survival. The treatment wipes out most of the pups’ microglia, but by the time they reach 60 days of age, they have a new batch of the cells.

The treated mice no longer show social difficulties or groom themselves excessively. The treatment decreases their microglia’s production of growth factors and interaction with neurons, and normalizes the density of dendritic spines.

Seiko Ikezu says it is unclear why the newly grown microglia do not have the same defects as the original microglia.

However, pups treated with the drug show improvements in behavior even before new microglia have had a chance to grow. This suggests that loss of the aberrant microglia is enough to improve behavior, Ikezu says.

The pups may still be impaired in other ways. Ikezu’s team is testing the mice’s cognitive functions before and after the new microglia grow. They are also exploring whether inhibiting the growth factors produced by microglia is enough to improve the pups’ behavior.