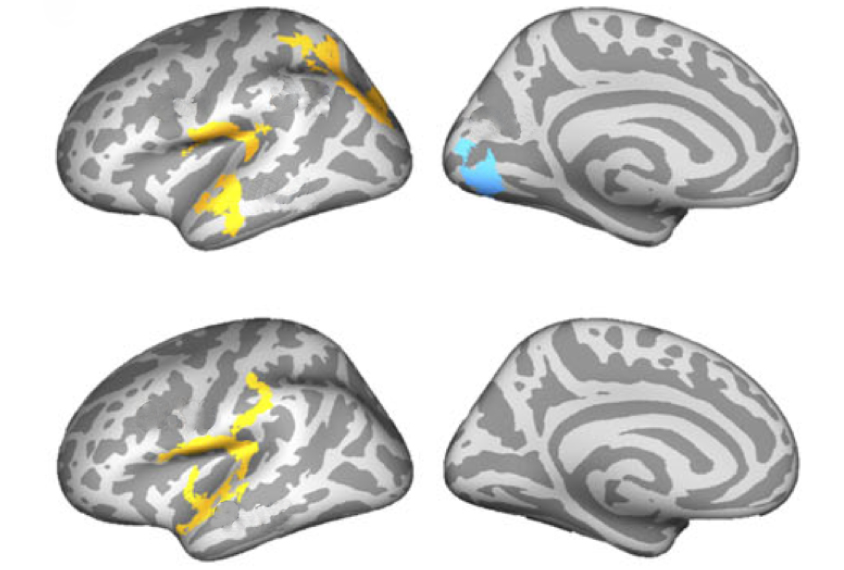 Buckling brains: In school-age children with autism, the brain’s top layer shows exaggerated folding in multiple lobes (yellow) and is atypically smooth in one region (blue).

The brains of children with autism fold differently than those of their typical peers, two new studies suggest1,2. But whether they are unusually smooth or convoluted depends on location and age.

Certain regions of the brain’s outer layer, the cerebral cortex, are more intricately folded in school-age children and adolescents with autism than they are in controls, according to one of the studies.

In young people, this folding difference may be the most obvious structural feature of the autism brain, says Ralph-Axel Müller, professor of psychology at San Diego State University, who led the study. Their brains don’t tend to show overall differences in brain volume or surface area, for example.

“It seems like [brain folding] is actually a rather sensitive anatomical metric,” he says.

Together, the studies add to evidence that folding follows a different developmental path in autism brains than in controls.

“That is fascinating,” says Greg Wallace, assistant professor of speech, language and hearing sciences at George Washington University in Washington, D.C., who was not involved in either study. “Having autism is going to affect developmental trajectories of all kinds of things, including cortical structure,” he says.

Müller and his team scanned the brains of 64 children and adolescents with autism and 64 controls, aged 6 to 18 years. They gauged the degree of folding by comparing the surface area of the cerebral cortex buried within the folds of the brain with the area of exposed cortex. This measurement reflects both the number of folds and their depth at approximately 340,000 points across the cortex.

Young people with autism show a lot of folding in patches of the left temporal and parietal lobes — regions responsible for processing sound and spatial information respectively, the study found. They also show excessive folding in temporal and frontal regions on the right side of the brain, including areas that govern decision-making and motor skills.

They have less folding in one spot on the occipital cortex, the brain’s visual hub.

The researchers also studied scans from 31 children with autism and 31 controls, aged 7 to 18 years, from the Autism Brain Imaging Data Exchange (ABIDE), an open-access data repository. They found pronounced folding in temporal and frontal areas close to those in their original sample.

Replicating their results in the ABIDE sample is a strength of the work, Wallace says. “Having both of those things really gives us more confidence in the findings,” he says.

Many of the brain areas with exaggerated folding are among the earliest to develop folds during gestation, says Ruth Carper, associate research professor of psychology at San Diego State University, who co-led the study with Müller. Early developmental disruptions in these areas may magnify the folding over time, she says.

Alternatively, exaggerated folding, or gyrification, may be a remnant of brain overgrowth from early childhood, given that most autism brains in late childhood are not overlarge. “I think what we’re seeing with the gyrification index are traces of these developmental aberrations,” Müller says. The results appeared 16 May in Cerebral Cortex.

In a subgroup of 17 boys with autism who have enlarged brains, however, the researchers found increased folding in five areas of the cortex that sit along a line dividing the hemispheres.

This finding suggests that the children with enlarged brains have a specific subtype of autism, says lead investigator Christine Nordahl, associate professor of psychiatry and behavioral sciences at the University of California, Davis. “We, more and more, are convinced that they really represent a distinct subgroup not only in terms of their brain size but their pattern of brain differences.”

Nordahl and her team also scanned some of the children again at age 5. They saw that folding in four regions of the cortex tends to increase in children with autism over this period but remains roughly the same in controls. The researchers presented an early take on these results at the 2016 International Meeting for Autism Research, in Baltimore. They published the updated findings 30 May in Cerebral Cortex.

Müller and his team found hints of a different developmental trajectory by comparing children of different ages. Cortical folding appears to decrease with age across large swaths of the frontal, parietal and occipital lobes in both young people with autism and controls. But the rate of this decline is faster in the young people with autism in some regions than in controls.

Together, the two studies suggest that the cortex both folds and unfolds differently in autism. But exactly how this story unfolds must await new data from both teams: Müller and his team plan to study toddlers and middle-aged adults with autism, and Nordahl’s group aims to follow the same children into adolescence.