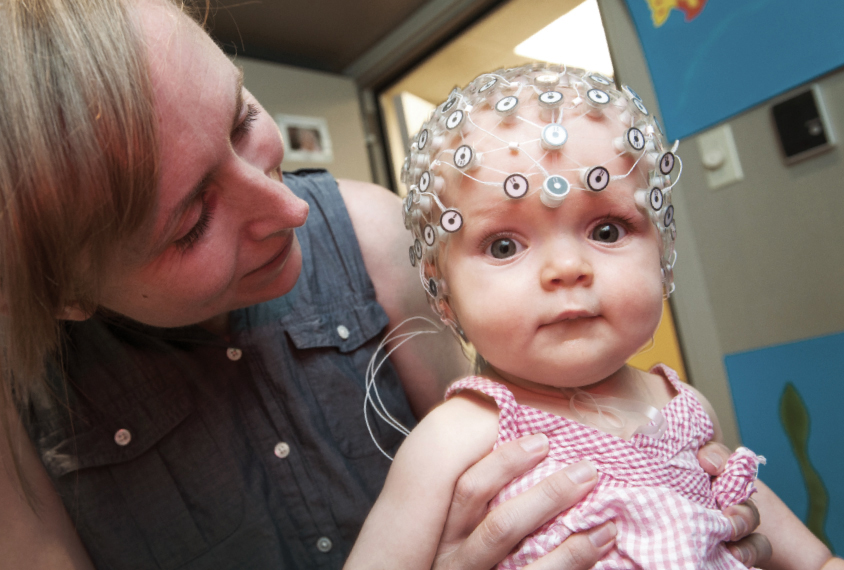 The critical period for this stage of language learning typically begins by about 6 months of age, but it doesn’t start until about 9 months in autistic children, the study shows. The longer the delay, the more difficulties the child has comprehending language at 12 months of age.

“That’s a large shift in terms of the percent of time they’ve had to learn language,” says Laurel Gabard-Durnam, a postdoctoral fellow in Charles Nelson’s lab at Boston Children’s Hospital. She presented the unpublished findings yesterday at the 2018 Society for Neuroscience annual meeting in San Diego, California.

Evidence from animal studies suggests that an increase in signals that inhibit brain activity can trigger the onset of a critical period — the period of time in which brain circuits can be shaped by experience1.

Autism is thought to involve too little inhibition of brain activity. The researchers set out to explore whether this delays the critical period for learning speech sounds in children with autism.

They used electroencephalography (EEG) to record brain activity in 91 baby sibs — children who have an older sibling with autism and are at increased risk of the condition — and 79 babies with no family history of autism. Of the 91 baby sibs, 24 were diagnosed with autism by age 3.

The researchers recorded EEG signals when the babies were 3, 6, 9 and 12 months old (not all of the children provided data at every time point). They focused on brain activity in the auditory cortex, a brain region that processes sounds.

At each time point, the researchers recorded the ‘resting-state’ brain activity as babies watched a silent video of bubbles or a screen saver. They also collected EEG data as the infants listened to a recording of a person repeating the syllable “da.”

They calculated the ratio between the infants’ resting-state activity and that triggered by the speech sound. In the control group and in the baby sibs without autism, this ratio starts out high, drops at 6 months of age and remains low at 9 and 12 months.

Studies have shown that babies learn to distinguish between highly similar speech sounds, such as “da” and “ta,” when they are 3 to 6 months old, so the drop in the ratio may reflect the onset of the critical period for distinguishing between speech sounds, Gabard-Durnam says.

In babies later diagnosed with autism, however, the ratio starts out high and doesn’t drop until 9 months of age.

The team is validating the findings in a different set of baby sibs. They are also testing infants with Rett syndrome, a condition related to autism.