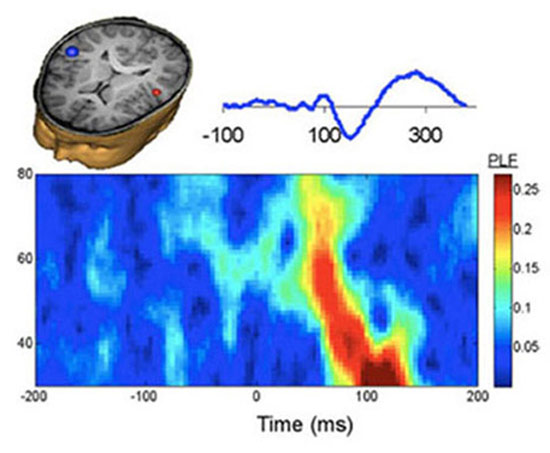 When given during embryonic development, the drug, valproic acid (VPA), has been shown to trigger autism-like features in rats2. This is one of the first neurobiological studies of VPA exposure in mice, and the first study to look at brain-wave patterns in an autism animal model.

“The trouble with animal models of autism is that presently they’re being validated behaviorally,” notes investigator Timothy Roberts, vice chair of radiology at the Children’s Hospital of Philadelphia. Observing brain patterns, he says, “gives you a much tighter coupling between bench and bedside.”

Roberts and lead investigator Steven Siegel also showed that giving the VPA-exposed mice MPEP — a drug that has improved symptoms in mouse models of fragile X syndrome, an autism-related disorder — normalizes some of the abnormal behaviors and brain patterns.

Using brain signatures of autism in addition to behavioral measures could be useful for validating drugs for autism. “It would increase your confidence that the drug might have some effect in patients,” notes Paul Wang, vice president of clinical development at Seaside Therapeutics, a biotech company in Cambridge, Massachusetts. Seaside is working on a drug similar to MPEP to treat children with autism and fragile X syndrome.

Last February, Roberts’ group used magnetoencephalography (MEG) — a type of brain scan that measures changes in magnetic fields — to show that children with autism process sounds a split-second slower than healthy controls do3.

In the new study, the team reports another abnormal brain signature from the same group of children.

Normally after a child hears a beep, there is an immediate burst of gamma waves, which arise when cells fire together at a rate of at least 20 times per second. After hearing the same beep every second for 100 seconds, the brain produces a series of gamma bursts synchronized with the tone. However, the synchrony of the gamma responses with the tones is not consistent over time in children with autism.

These high-frequency waves have received a lot of attention in the past few years. Some researchers have proposed that synchronized gamma oscillations form the basis of conscious thought4. A few studies have shown that the waves are out of sync in individuals with autism, schizophrenia and other psychiatric disorders.

The researchers found both autism brain signatures — the delay in sound processing and the decreased gamma synchrony — in mice that had been prenatally exposed to VPA.

VPA exposure is a strong risk factor for autism. Pregnant women who take the drug have a seven- to ten-fold higher risk of having a child with autism compared with those who don’t. Scientists have studied rat models of VPA exposure for a decade, but the new study is among the first to expose mice to the drug.

In the new study, Roberts and Siegel found an association between neuroligin-3 expression and the synchrony of gamma oscillations in the VPA mice. This makes sense biologically because the gene encodes a protein that helps neurons communicate. Disrupting the precise timing of neuronal firing could underlie the unsynchronized gamma waves seen in the mice.

The correlation provides “strong evidence” that the VPA mouse is modeling brain changes in children with the disorder, notes Foster, associate professor of psychiatry and behavioral neurosciences at McMaster University in Hamilton, Ontario. “My expectation is that we will see several groups publishing using this model in 2011.”

Still, other researchers say that, because VPA exposure accounts for so few cases of autism in people, and is not completely understood on a biological level, VPA rodents are relatively weak models of the disorder.

The approach is likely to be more useful in animal models of autism whose genetic makeup is known, notes Pavel Osten, associate professor of neuroscience at Cold Spring Harbor Laboratory in New York, who is looking for patterns of gene expression in the brains of mouse models of autism. “Looking for some biomarkers at the brain level is clearly an important direction,” he says.

The researchers plan to systematically look for abnormal brain signatures in several genetic mouse models of autism, including those missing neuroligin genes.