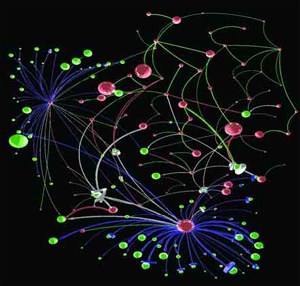 Network news: Despite autism’s diversity, there are shared patterns of expression in brain tissue of people with the disorder. A. Rzhetsky and K. P. White

Scientists have pinpointed two major gene networks relevant to autism by analyzing gene expression in brain tissue from individuals with the disorder. Researchers presented the data Sunday at the Society for Neuroscience annual meeting in San Diego.

Daniel Geschwind‘s team at the University of California, Los Angeles, has found that more than 400 genes are expressed differently in the brains of people with autism compared with controls. What’s more, these genes are the hubs in two large gene networks, connecting them to dozens of other genes, the researchers say.

“Even though everyone thinks of autism as being fairly heterogeneous, we were very surprised at the level of shared molecular changes,” notes Irina Voineagu, a postdoctoral fellow in Geschwind’s lab. “We’re starting to believe that here we are looking at molecular neighborhoods associated with the pathology in autism.”

The researchers performed a genome-wide transcription analysis on tissue from the frontal cortex, temporal cortex and cerebellum of 19 people with autism and 17 controls.

They found that 235 genes — most of which are involved in immune function — are over-expressed in the autism group, and 209 genes, most of which are involved at the junctions between neurons, are under-expressed. The team repeated the analysis in a second set of brain tissues from nine autistic brains and five controls and found a “high degree of overlap” with the first set, Voineagu says.

In 2008, Geschwind’s team reported that the human brain can be divided into ‘modules’ of genes that tend to turn on and off at the same time, and that these networks tend to have shared biological roles.

In the new study, the team performed the same bioinformatics analysis on data from the brains of people with autism, and found that the general organization of modules is similar to what they found in healthy brains.

They found two modules, however, in which gene expression levels are significantly different in the brain tissue from people with autism. The first, dubbed M16, holds genes that are over-expressed in these brains. It includes genes related to star-shaped cells called astrocytes, and activated microglia — immune cells that have been fingered in studies of autism.

The second module, dubbed M12, includes genes that are under-expressed in the brains of people with autism. It includes genetic markers of neurons and synapse-related genes. Intriguingly, the network also holds 13 genes that have been implicated in autism, including A2BP1, SLC25A12 and CNTNAP2.

By examining how the dozens of genes are connected in the networks, the researchers may be able to identify new candidate genes for autism.

Finally, the researchers investigated whether the genes identified by each module also show up in an association study of thousands of individuals in the Autism Genetic Resource Exchange, a large gene bank of families with autism. They found a strong association between autism and the genes in the M12 module, but no link for genes in the M16 module. This suggests that synapse dysfunction in autism is more heritable than immune abnormalities, the researchers say.