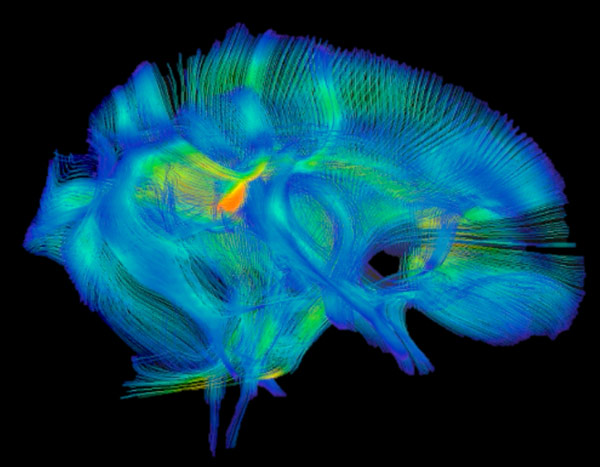 Among babies who go on to receive a diagnosis of autism at age 2, alterations in brain structures forecast the severity of repetitive behaviors. The preliminary results were presented Saturday at the 2015 International Meeting for Autism Research in Salt Lake City, Utah.

The findings suggest that repetitive behaviors stem from abnormal wiring patterns in the brain that crop up as early as 6 months of age, says lead investigator Jason Wolff, assistant professor of educational psychology at the University of Minnesota in Minneapolis.

Repetitive behaviors, such as hand flapping and toy spinning, are among the core features of autism and are one of the disorder’s earliest symptoms. Two studies published last year that examined infant siblings of children with autism — so-called ‘baby sibs’ — suggest that those who are later diagnosed with autism show an unusual number of repetitive behaviors as early as 12 months of age1,2.

In the new study, Wolff and his colleagues used diffusion tensor imaging (DTI) to scan the brains of 42 baby sibs who were diagnosed with autism at age 2. DTI provides a measure of the structural integrity of white matter — nerve bundles that connect different brain regions. The researchers probed the structure of five white matter tracts previously linked to repetitive behaviors in autism or conditions such as obsessive-compulsive disorder.

The babies are part of the Infant Brain Imaging Study, which has been collecting brain scans and other data on hundreds of baby sibs at 6, 12 and 24 months of age. The researchers also analyzed each child’s repetitive behaviors at age 2.

Differences in one tract in scans taken at age 6 months predict repetitive behaviors at age 2. This tract involves part of the corpus callosum, a huge nerve fiber bundle that connects the two sides of the brain and has been implicated in autism3. Babies who later show the highest levels of repetitive behaviors had a higher measure of integrity in this tract at 6 months.

The more this tract’s integrity increased between 6 and 24 months, the more repetitive behaviors a child displayed at age 2. The researchers saw a similar pattern in two other fiber tracts that connect the cerebellum — the seat of motor coordination — to motor regions in the cerebral cortex (the brain’s outer rind) and to the thalamus, which integrates sensory information.

These structural observations appear to correlate specifically with repetitive behaviors, and not with other core features of autism. The researchers saw no association between the structure of any of the five tracts and deficits in social skills or communication.

Surprisingly, the researchers also found no relationship between repetitive behaviors and the structure of tracts that link the cerebellum to the striatum, a region involved in both movement and motivation.