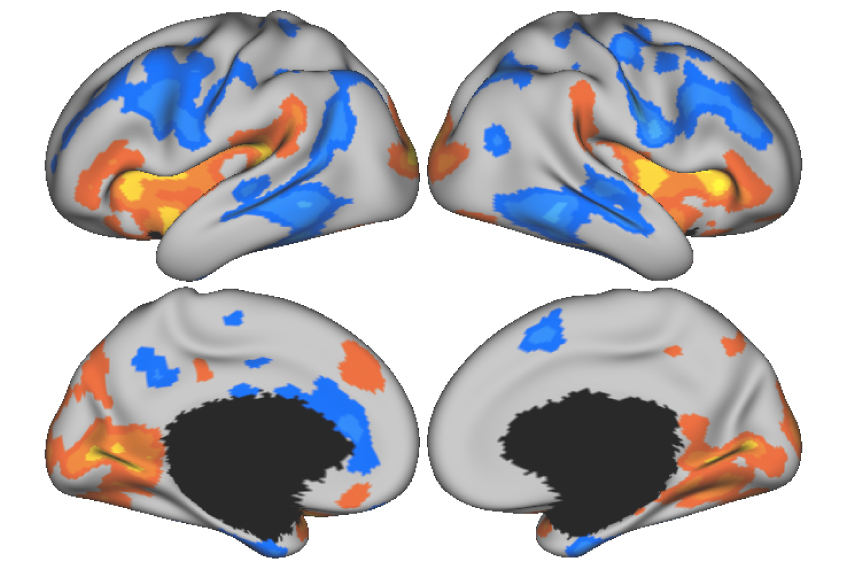 Surface effect: The brain’s outer shell is unusually large in some areas (orange, yellow) in people lacking a copy of chromosomal region 16p11.2.

Missing one copy of a stretch of chromosome 16 leads to an enlarged brain; an extra copy of the region has the opposite effect1.

The consistency of this finding suggests that genetics drives the observed effects.

“The mutation is doing its thing [with regard to head size] regardless of environment or genetic background it’s sitting on,” says lead researcher Sébastien Jacquemont, associate professor of pediatrics at the University of Montreal in Canada.

The findings stem from two large projects to characterize the effects of having too many or too few copies of 16p11.2. These so-called copy number variants (CNVs) of the region can lead to intellectual disability, language problems and autism.

Smaller studies have produced similar conclusions about the relationship between the mutations and brain volume. The new study shows that the effects on brain size are consistent across seven sites in the United States and Switzerland, and using two different methods to parse the data. The results also hold regardless of the participants’ sex or age, which ranged from 6 to 63 years.

The researchers used magnetic resonance imaging to scan the brains of 78 people with a 16p11.2 deletion, 71 with a duplication and 212 controls.

This combined analysis was large enough to detect significant changes in individual brain regions: The insula is especially large in individuals with the deletion and especially small in those with the duplication.

“The insula is a key structure for social cognition, emotion processing and things like that,” says Carrie Bearden, professor of psychiatry and of biobehavioral sciences and psychology at the University of California, Los Angeles, who was not involved with the study. “So, if you were going to pick one brain structure to see these gene dosage-sensitive effects, I think [the insula] is a very, very interesting one to pop out.”

Overall, the brain volume of people with a deletion of 16p11.2 is 9 percent greater than that of controls. Conversely, the brain volume of people with the duplication is 7 percent smaller than that of controls. These changes affect both gray and white matter — the neuronal cell bodies and their connecting fibers, respectively. The changes to the brain’s outermost layer, the cerebral cortex, primarily affect its surface area rather than its thickness.

“The presence of mirror findings in the brains of individuals with deletions and duplications adds support to the validity of the findings,” says Joseph Piven, professor of psychiatry at the University of North Carolina at Chapel Hill, who was not involved with the study. The work appeared 27 March in Biological Psychiatry.

The team did not include participants who have severe intellectual disability, anxiety or behavioral problems because these individuals have trouble sitting still in a scanner. This selection bias could have skewed the results, says Konstantinos Zarbalis, assistant professor of pathology and laboratory medicine at the University of California, Davis, who was not involved in the study.

Changes in brain size do not track with any specific features in the participants, including intelligence quotients and autism diagnosis. This does not mean there is no relationship there, says Jacquemont. An individual’s environment and genetic background may dictate the effect of the impact.