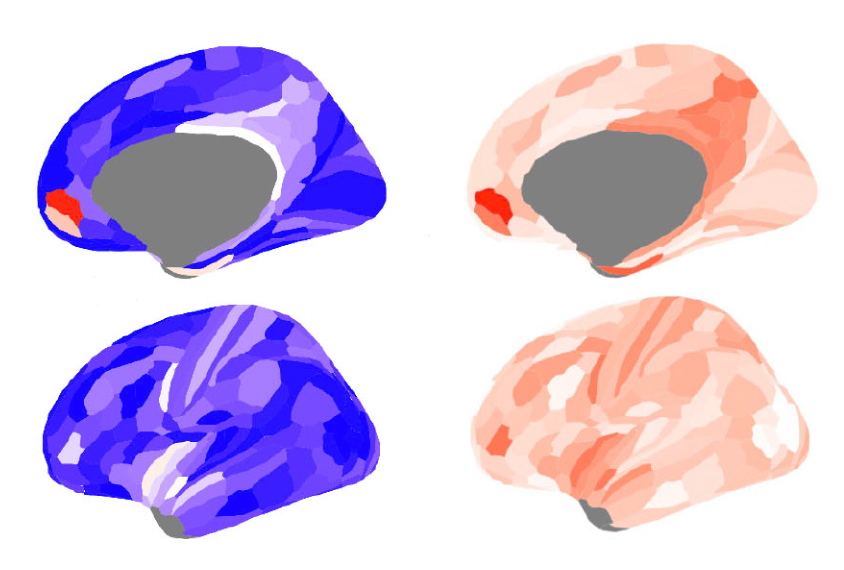 Autistic men show a greater imbalance between excitatory and inhibitory signaling in the medial prefrontal cortex than autistic women do, a new study has found1. The sex difference in this brain area, which is involved in social behavior and cognition, could help explain why autistic women seem to camouflage their autism more often than autistic men do, researchers say.

The work builds on the signaling imbalance theory of autism, which proposes that autism is the result of too much excitation or too little inhibition in the brain. Researchers have been hard pressed to directly measure this imbalance, also known as the E:I ratio.

Some studies have relied on patch clamps, devices that measure electrical activity cell by cell in brain slices or in sedated animals and that are too invasive to be used in people2. Other studies have inferred the E:I ratio from neural activity patterns in brain scans, relying on a measure called the 1/f slope, which gauges how ‘noisy’ or random a signal is3.

A related measure called the Hurst exponent (H) informs the new results. The larger H is, the less noisy the brain signals and the more typical the balance between inhibition and excitation.

In 2010, members of the same research team reported that H was significantly lower in the brains of autistic men than in neurotypical men4. For the new study, they wanted to find out if the same holds true for women. They used brain scans from the earlier study, collected using a technique called functional magnetic resonance imaging (fMRI).

“We thought that perhaps a metric like H could help give us that window into E:I mechanisms,” says co-lead researcher Michael Lombardo, senior researcher of neurodevelopmental disorders at the Istituto Italiano di Tecnologia in Genoa, Italy. “It was a good opportunity to test that question with imaging data, but we had to do a lot of groundwork to get to that point.”

That groundwork began with computational models, which Lombardo’s team used to predict how changes to the E:I ratio would affect 1/f slope and H in fMRI measurements. The models predicted that as excitation increases, brain signals get noisier, the 1/f slope flattens and the value of H drops.

They then tested this prediction in mice engineered so that their excitatory neurons produce ‘designer’ proteins; injecting the mice with an experimental drug that binds specifically to these proteins increases excitation in their brains. That tracked with a flatter 1/f slope and a lower H, according to fMRI measurements.

Confident that these measures reflected E:I ratio, the researchers examined brain scans from 34 autistic men, 33 typical men, 34 autistic women and 34 typical women, all aged 18 to 49 years. The value of H was lower in the medial prefrontal cortex of the autistic men than in that of their typical peers, indicating a greater E:I imbalance. By contrast, H did not differ between the autistic and typical women.

To try to understand how this imbalance might arise, they compared a list of known autism genes with a list of genes whose expression changes in cells treated with a male sex hormone, according to previous studies5. The genes controlled by sex hormones overlap significantly with the autism-linked genes that are important for excitatory neurons, they found.

These overlapping genes are expressed strongly in the prefrontal cortex, according to data from an atlas of gene expression in the adult brain. Taken together, this suggests that the medial prefrontal cortex is more likely to be overly excitable in autistic men than it is in typical men or any women. The results were published in August in eLife.

Combining computer modeling, mouse modeling, human imaging data and gene-expression analysis is “a real strength of this paper,” says Audrey Brumback, assistant professor of neurology and pediatrics at the University of Texas at Austin, who was not involved in the study. “They’re really approaching this question of E:I imbalance from different angles that are all complementary.”

Previous work from this team showed that autistic women who engage in camouflaging — behaviors that make their autism traits less apparent to others — have activity in their ventromedial prefrontal cortex that closely resembles that of typical women.

Results from the new study support this idea: Higher H values in this same region, reflecting a more typical E:I balance, strongly tracked with a greater ability among autistic women to mask social-communication difficulties. This relationship did not appear in the autistic men.

It is not clear whether the more typical E:I ratio enables autistic women to camouflage or reflects a brain tuned by a lifetime of camouflaging.

“If you’re flexing that muscle more, that’s the one that’s going to get stronger,” Brumback says.

Other research has suggested that E:I imbalance is not a root cause of autism, but rather a result of another, yet unknown cause.

Regardless, E:I imbalance could plausibly be a biomarker of autism — one that may prove useful for evaluating drugs or therapies, and for stratifying people by neural signatures in order to target those therapies, says Dan Feldman, professor of neurobiology at the University of California, Berkeley, who was not involved with the study.

“Autism is such a diverse thing,” he says, “that it can be useful to have physiological measurements that help group or subdivide or classify types of autism.”